Earlier this year I had an enthusiastic gallery visit from Suzy Royce Cruse, whose multi-faceted lifestyle gives her seemingly endless curiosity and interest in a broad range of topics. Suzy, a librarian by passion and training, creates one of a kind, sculptural book works and has been a gallery fan for many years. During our visit, she invited me to come to her town, Winter Park, Colorado, with my Artists Books on the Road project. I love Grand County and a visit to one of the communities in the area is something I’d hoped to work out. Winter Park is a town well known for its downhill skiing. Practically every kid I knew growing up in Denver, including my older siblings, took advantage of the Ski Train – a seasonal train operated by the Denver and Rio Grande Western Railroad from 1940–2009. For nearly 70 years, The Ski Train left from downtown Denver’s Union Station and climbed 4000 feet, passing through 29 tunnels before reaching the final mountain underpass, the 6.2 mile long Moffat Tunnel. The Moffat is the highest railroad tunnel in the United States, and the third longest. Incredibly, it passes under the Continental Divide. The trains’ final stop was less then 100 yards from the base of the Winter Park Resort ski lifts. Sadly, the train, burdened with escalating costs, operational conflicts and the uncertainties posed by the redevelopment of Denver’s Union Station made its final run in 2009. Since then, there have been two successful promotional runs and if all goes well, periodic runs during the 2016 ski season are a possibility. Winter Park is one of several small towns in Grand County, where town-to-town resource sharing seems to have either been strategically implemented or naturally evolved. Other towns in the area include Fraser, Tabernash, Granby, Grand Lake, Hot Sulphur Springs and Kremmling. Buying groceries requires a trip to Granby or Fraser. The best all-round store for household goods is in Granby (and many claim the best breakfast is found in Granby as well); the county seat is in Hot Sulphur Springs. All of the towns except Winter Park and Tabernash have a branch of the Grand County Library District. Grand Lake is situated on the shores of Colorado’s largest natural body of water and is well known to mountain and water recreation enthusiasts as the western gateway to the vast and undeniably impressive Rocky Mountain National Park. So, although there is a long tradition of cattle ranching and hay production in the area, along with mining, the county now relies on tourism for economic survival. Unlike other communities I’ve visited, those in Grand County aren’t yet focusing on developing the arts as a significant future contributor the county’s economic well being. Suzy was the perfect hostess for Artists Books on the Road.

Working with Suzy in her capacity as co-host for an annual event Art Out of Thin Air (Winter Park, at 9100 feet is one of the highest elevations – and thus thinnest air – towns in Colorado), I arrived at Bistro 28 in Tabernash for the 7th Annual AOTA Member Show and Sale. View from the window of Bistro 28

The setting was beautiful; my tables were positioned near large windows looking out on magnificent views, and also near the double doors through which over 300 artists and art lovers arrived over the course of the evening. This is a remarkable accomplishment given the reality that, as is the case with much of Colorado, cultural events are in competition with outdoor recreation and, during summer tourist season, recreation is the focus for most visitors. 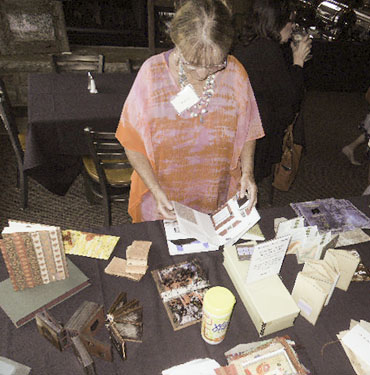 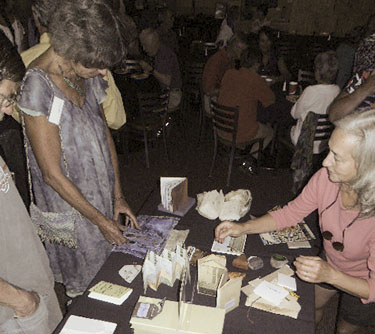 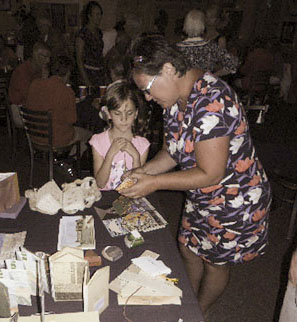 Throughout the three hours of the event, I showed artists’ books to dozens of visitors, a clear majority of whom were unfamiliar with the genre. The notable exception was Douglas M. Smith Jr., whose cousin is none other than Martha Wilson – founding director of the Franklin Furnace Archive, a non-profit organization in New York City. The archive’s admirable mission is to present, preserve, interpret, proselytize and advocate time-based visual art including artists’ books and periodicals.

Thank you Suzy, all the artists of AOTA and Bistro 28 for including me in such a delightful celebration of visual arts at high altitude.

Artists Books on the Road in W…