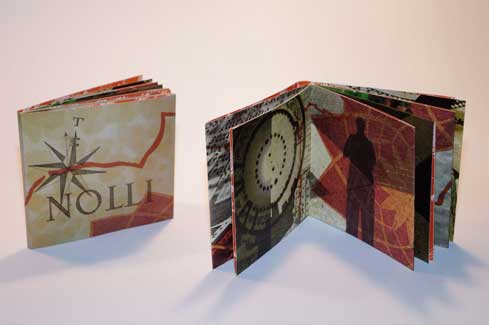 A one-sheet book printed by offset lithography in six colors. Required six runs through the Heidelberg Kors press at the Borowsky Center for Publication Arts. Laid in an illustrated letter fold wrapper. Signed and numbered by Austin and Snyder.

Alice Austin: “Nolli, an exploration of textural layers of Rome by Alice Austin and Jon Snyder, was inspired by the Giambattista Nolli map of Rome, 1748. This project is the result of research done as a visiting artist at the American Academy in Rome. The front and back covers show elements from the Nolli map combined with a photo of a litho of the Roman fragments of the city map. The red line that continues throughout the book is the city wall and is shown on the reverse side of the map in white. The first page is a detail photo of the Nolli map. The second page is a watercolor of Bramante’s Tempietto [a small commemorative martyrium]. The third page is Nolli. The fourth pages is Jon’s shadow over my linoleum print of the [Piazza del] Campidoglio pavement. The fifth and sixth pages are photos of the Campidoglio. Pages seven, eight and nine are the first century pyramid of Caius Cestius. My feet are on the last page. The other side of the map unfolds to reveal a drawing of historic Rome and the architectural plan for St. Peter’s.”

Alice is a book artist and printmaker who lives in Philadelphia and loves to travel. 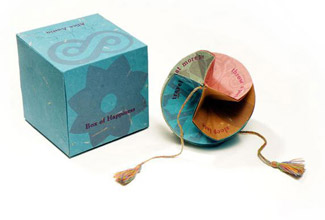