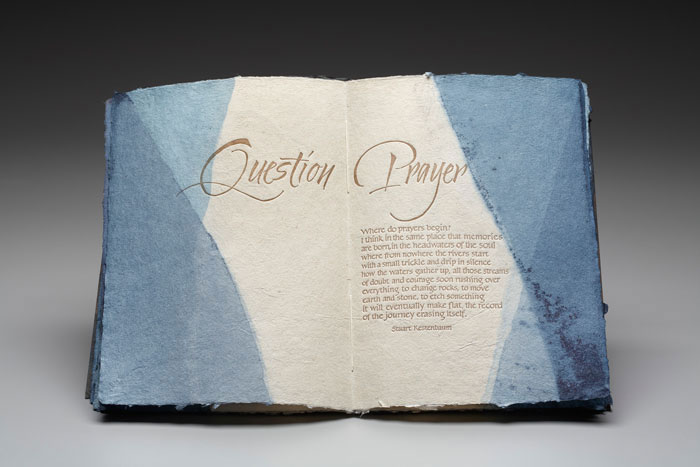 The inspiration for this book came from Stuart Kestenbaum’s poems. A Deep Blue Amen was designed and crafted by Amanda Degener but lives because of conversations with Jan Owen. The original calligraphy by Jan Owen was made into polymer plates and printed by Amanda. All indigo dyed Belgium flax text paper was made and colored soul-y by Amanda Degener. CB Sherlock and Karen Kinoshita helped Amanda sew the poems into a book whose covers were sheet formed and colored with Indigo and Walnut dye by Amanda at Cave Paper. A Deep Blue Amen is housed in a clamshell box made at the great Campbell Logan Bindery with Cave Paper’s Granite, Layered Indigo Night, and a unique Alphabet paper using Jan Owens calligraphy.

Amanda Degener is President of Cave Paper, Inc., a production hand papermaking studio in the North Loop in downtown Minneapolis. She has been active at Minnesota Center for Book Arts since its founding. She is a Founder, their first Artist-in-Residence and first Artistic Director of MCBA. She received her MFA in Sculpture at Yale School of Art and a BA at Bennington College. She was the co-recipient, along with Cave Paper co-proprietor Bridget O’Malley, of the Minnesota Book Artist Award in 2012. Calligrapher Jan Owen is a calligraphic book artist living in Belfast, Maine. Her work incorporates brush marks, paste paper, weaving and written words into books or panels. Poet Stuart Kestenbaum grew up in Maplewood, New Jersey, and received a BA  from Hamilton College. He has lived in Maine for many years and since 1988 has been the director of the Haystack Mountain School of Crafts in Deer Isle. His previous titles include Prayers & Run-on Sentences, and House of Thanksgiving.