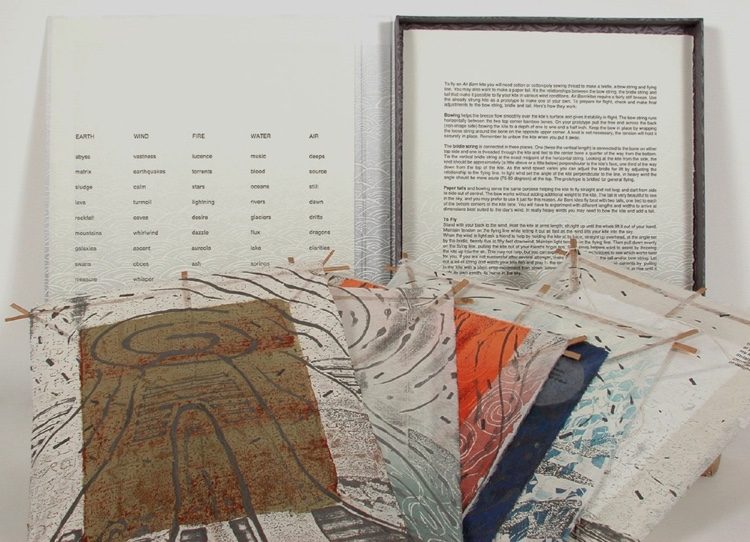 Air Born is collaboration with poet Melinda Kennedy. It is a boxed book containing five flyable kites with letterpress printed text on each. The kites represent the elements: Earth, Wind, Fire, Water, Air. Kresge came up with the idea for the book and its title Air Born while traveling in China and Japan. The relationships between the elements are explored through the text and images upon each kite as well as the graphic design and layout from kite to kite. The cover endpaper leads the viewer into the experience of the book by presenting a list of the attributes of the elements. From these lists the poet constructed the stanzas on each kite. In this way the viewers interact with the construction of the poems. By looking at, reading and exploring the kites the viewer finds visual and verbal connections between them. As in all of Kresge’s work her concern is exploring the universal questions through individual experience.
Collaborator: Poet Melinda Kennedy Air Born is the second of three collaborations between book artist Kresge and poet Melinda Kennedy. The process of this book involved Kennedy responding to Kresge’s interest in the natural elements and kites. The collaborators worked back and forth as the project evolved. The final page is a broadside written by Tal Streeter, sky artist and sculptor who talks about the logistics of flying the kites and the meaning of kites as a objects, metaphor and experience.
This piece is very tactile and textural. When held to the light the paper has a translucency appropriate to airborne objects. It has been exhibited many ways: in cases, on pedestals, in sequence on the wall. It has been shown with the kites hanging and fans moving them. The artist welcomes viewers to handle the kites though cotton gloves are suggested.

About the artist:
resides in Salem, Oregon, United States
Ann Kresge is an internationally exhibited artist whose works are in many university, museum and private collections: The National Museum of Women In The Arts, The Victoria and Albert Museum, London, Yale University, Vassar College, New York Public Library and the US Library of Congress. She has been an Artist-In-Residence at Djerassi, MacDowell Colony, Artlife Latinoamericano (Mexico City), Atellier17 (Paris), Women’s Studio Workshop, Library Fellow at National Museum of Women In the Arts and Teaching Artist at Sitka Center (OR). Kresge earned a BA from Smith College and MFA Pratt Institute.