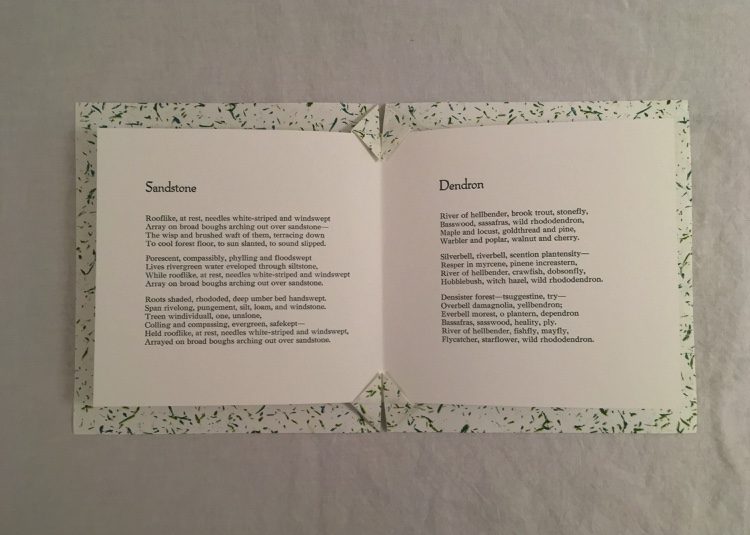 This book was made for Asheville Bookworks’s Vandercooked Poetry Nights, a reading series accompanied by letterpress-printed broadsides. Since Asheville, North Carolina, sits in the range of the eastern hemlock, which has been decimated by the introduction of the woolly adelgid, I decided to print two charms I’d made for hemlock, Sandstone and Dendron. The poems appear in an earlier form in the anthology Big Energy Poets (BlazeVOX, 2017). As I worked on the project, I began to think of it as a hemlock hymnal—the two pages of text sit open in the hands, inviting the viewer to read them aloud. At Bookworks, the audience and I read Dendron together using these hymnals. I encourage similar readings, solo or in chorus.

The cover sheet is printed on Legion Bamboo on a Saroglia Canuck, with a collograph of hemlock needles gathered by Gary Hawkins. The interior is printed on Folio on a Vandercook SP20, in Packard, Caslon Light, and Garamond.

I first saw the folded cover that encloses the inner sheet at the Impractical Labor in Service of the Speculative Arts residency in summer 2018. Later, at Bookworks, Karen Hardy kindly made a mockup of the structure for me, which I used to make the books.

Shortly after I completed the project, I received my copy of The Art of the Fold, and after recovering from the giddiness the book elicits, was surprised to see the structure described as a greeting card. I have liked using it for something a bit more weighty and less ephemeral. I love the way the cover supports and lifts up the inner sheet, promising that it will contain something good.

Anna Lena Phillips Bell is the author of Ornament, winner of the 2016 Vassar Miller Poetry Prize. Her projects include A Pocket Book of Forms, a limited-edition, travel-sized guide to prosody, and Forces of Attention, printed objects designed to help people use screened devices as they wish. The recipient of a North Carolina Arts Council Fellowship in literature, she teaches at UNC Wilmington, where she is editor of Ecotone and Lookout Books. She lives with her family near the Cape Fear River, and calls Appalachian square dances in North Carolina and beyond.