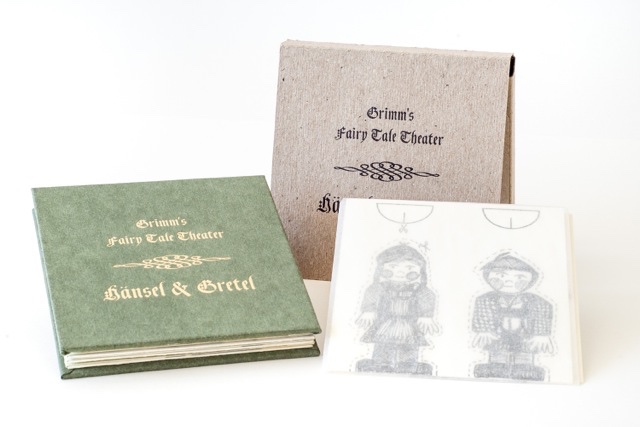 Growing up in Germany, hearing and reading Grimm’s fairy tales, I wanted to create my own version of Hänsel & Gretel. The structure of the book is a four-panel accordion book with a hard cover: each fold opens up to a scene, creating the idea of a late 18th early 19th century European toy theater. The book starts with the dark forest, lit by a full moon. The next scene shows the witch’s house. Followed by a pop-out cage where Hänsel is captured. The ending is an oven burning with flames and a clearing in the forest. The main characters, Hänsel, Gretel and the witch, are cut-out paper dolls in an extra glassine envelope in the phase box.

All images are linoleum block carvings by the artist. The pages, front and back, are printed in several passes on a Vandercook. Once all pages were finished they were die-cut on a Vandercook. The title on the cover is gold foil embossed to stay with the theme of the antique European toy theater. The paper dolls, front and back, are printed on a Heidelberg windmill. The paper dolls as well as the text is printed using photo-polymer plates.For the pages and paper dolls Stonehenge paper was used. The phase box is made out of chipboard. This book was made in an edition of 100 for Small Plates Edition at the SFCB in 2016, 80 books were given to the SFCB which have been sold out. 20 copies stayed with the artist, one of the last ones being this copy.

Bettina Pauly studied at the Academy of Art University San Francisco in the Book Arts and Letterpress program. In addition she took classes at the San Francisco Center for the Book. Bettina is living in SF as a book artist and working as a letterpress printer at Painted Tongue Studios, Oakland, California. She teaches book arts and letterpress classes at SFCB, BARN and Jaffe Center for Bookarts. She loves books and boxes both as physical objects and as containers of meaning. She is interested in a variety of folded, sewn and woven structures in which she can incorporate her printing.