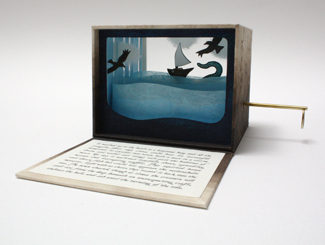 Lurking beneath the surface like demons of the subconscious, sea monsters are full of mystery. The creature in this tale washes ashore like a force of doom, bringing tragedy and despair to the people of a small coastal town. The map covering the box is an intaglio print. The text was printed on a letterpress as were the diorama elements which were then painted with water color. When the brass ring is pulled, the waves move, the sailboat rocks, and the arm of the monster rises threateningly.

Bryan Kring began as a writer but found that he didn’t have any stories to tell. Instead he saw pictures, so he took up painting. He went to art school and filled his home with canvases. When he ran out of space he turned to printmaking. Now in his forties, he is having fun with book arts and connecting the circle back to the writing.Bryan Kring is a graphic designer, letterpress printer and book artist in Oakland, California.

Bryan: When I was in my early twenties I wanted to be a writer. I wanted to be Ernest Hemingway with a bottle of rum in a grass hut on a beach in Cuba. I liked writing but I didn’t have any stories to tell. Instead I saw pictures so I took up painting. I went to art school and filled my home with canvases. When I ran out of space I turned to printmaking. I was seduced by the beauty of ink and paper and explored first etching and then later letterpress printing. Now, in my forties, as I play in the book arts I am having fun connecting the circle back to the writing. 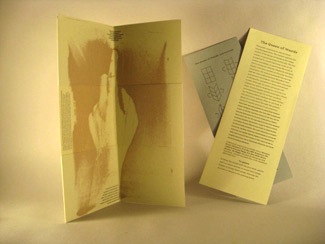