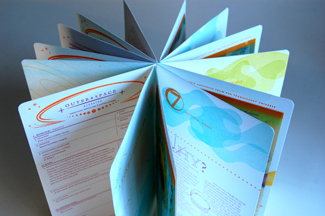 Casey Gardner – Matter, Anti-Matter and So Forth

“This is a book of seven stories about seven missions into seven celestial realms to investigate seven vital components of universal understanding: light, gravity, time, matter, infinity, and science. The seven folios are displayed in a star cluster and best read in sequence, but can be enjoyed randomly. Each folio includes a dispatch and layers of translucent exposures.

Phoebe is a traveller through time and space in search of what matters.  Along the way, she meets another intergalactic wayfarer, Amos, who is also on a quest. He seeks the 10th dimension which can only be reached by learning what is uniquely human. Together they travel to the end of the universe and back.

Meanwhile, the two travellers investigate the workings of the universe; each of the seven folios
Chronicles a mission that revolves around a field of exploration:  light, gravity, time, matter, infinity, constellations and science. On the back of each folio is a mission dispatch reporting their discoveries of meaning in the natural forces and phenomena of the cosmos.

Each folio includes layers of translucent exposures. These multi-layered artifacts reflect the time at the beginning of the universe when space became transparent and light could flow freely.

The title of the book refers to a time soon after the big bang, when, a small preponderance of matter  over antimatter was produced. This asymmetry gave rise to all that exists in the universe, explaining why we have something, rather than a vast nothingness. Ah!

Casey Gardner has a BFA in printmaking and graphic design from California College of the Arts. At CCA, she studied book art with several artists in this show: Macy Chadwick, Julie Chen, Betsy Davids, Alisa Golden and Nance O’Banion. Casey grew up in the mountains of Colorado. After graduating from CU Boulder with a degree in journalism, she worked in newspaper and magazine publishing. She lives in Berkeley, CA, making books and working as a graphic designer with Oona Lyons at C+O design.

Casey Gardner – Matter, Anti-Matter and So Forth