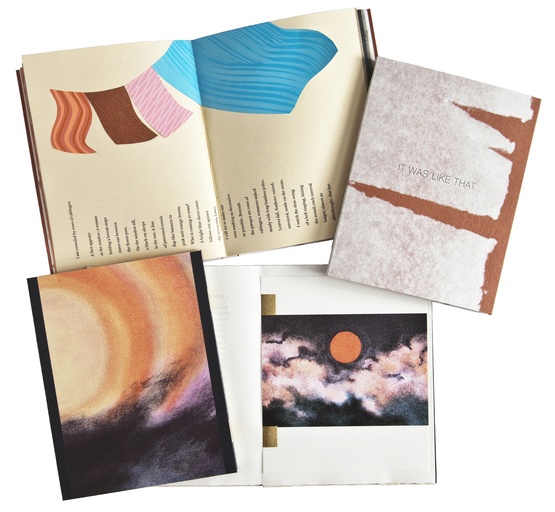 Trio is a set of three poetry books that, as many of Van Vliet’s previous works also do, celebrates the seasons.   Eclipse by Leland Kinsey, It Was Like That by Judy Haswell and Cosmos by Karen Hesse. They are all 8 by 6 inches and have exposed spines so they are issued with a chemise and slipcase.

Eclipses has poems about both solar and lunar eclipses and also has a set of diagrams that explain them. It Was Like That has three printed and twelve short ones in the author’s handwriting.

Cosmos has long poems as a centerpiece of each of the four seasons sections accompanied by haiku appropriate to the season. Each season is a separate pamphlet attached to an acrylic tube enabling the book to be read circling continuously.

The books themselves are a celebration of the wide palette of hand made papers that have accumulated at the press over the years and are listed in the colophons.

Signed by the poets.

Claire Van Vliet  is a fine artist, illustrator and typographer who founded the Janus Press in San Diego, California in 1955 and moved it permanently to Newark, Vermont in 1966. The Janus Press was named by Van Vliet after the ancient Roman god Janus, who stood for balance in the Renaissance because of his ability to look both forward and backward. At Janus Press Van Vliet has published collaborative works by contemporary writers, papermakers, printmakers and artists. Van Vliet has won numerous honors, including a MacArthur Foundation Prize Fellowship and Honorary Doctorates of Fine Arts from the University of Arts in Philadelphia and San Diego State University. She was elected to the National Academy of Design in 1995, and her work can be found in the collections of major academic institutions, libraries, and museums.