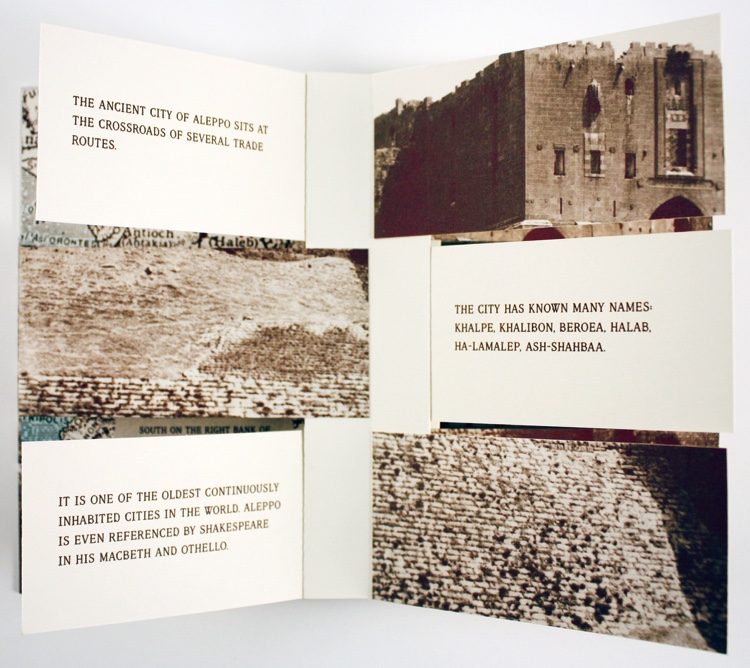 The Aleppo Citadel: The Tell Tells All; Time’s Revelations II. In 2015 I created a box of books with all using structures created by Hedi Kyle focusing on a fictional but possible archaeological tale focusing on Syria. All 30 books were designed as a set, but they also could be experienced independent of the set or as a subset within the set united by structure. This is one of six flag books focusing on various unique, jeopardized as well as historical sites destroyed by the ongoing conflict between various rebel groups, ISIS, and the government of Syria. This book features the Citadel of Aleppo that had survived in many forms since its origin as a pagan temple. It is through photography that its pre-destruction moment is preserved. Other books in this series include the Sumerian Tell Hariri, the Assyrian palace at Nimrud, Lammusu | Šedu, the unique architecture of the region, Beehives for Desert Dwellers, Tadmor: Oasis of the Many Palms (Palmyra), and The Sacred in Damascus: Temple, Basilica, Mosque.

Photographic sources for this series include stereoscopic photographs from my own collection as well as those selected from the Library of Congress Photographs online in public domain.

Elsi Vassdal Ellis taught design production and book arts for 40 years, retiring June 2017. She established EVE Press in 1983 and has produced over 141 editions via offset, letterpress and digital printing, and 127 unique books employing a variety of techniques and materials. Her work is permanently housed in many public collections including the National Museum of Women in the Arts, New York City Public Library, Ruth and Marvin Sackner Archive of Concrete and Visual Poetry, Grabhorn Collection in the San Francisco Public Library, and Arts of the Book Collection in the Yale University Library. 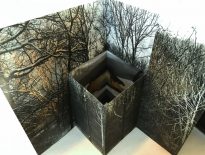 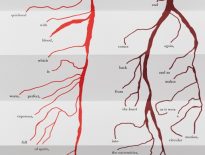