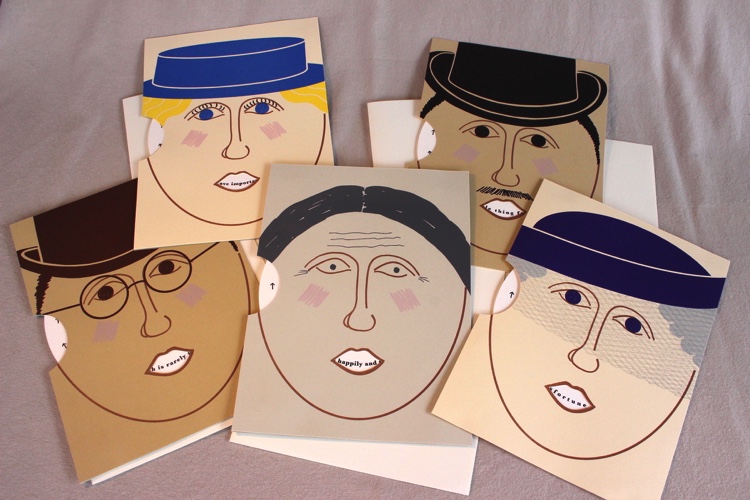 Emily J Martin – Oscar Wilde: In Earnest and Out

A set of 5 volvelles with faces of Oscar Wilde backing faces of characters from The Importance of Being Earnest. The inner wheels turn to allow the reading of lines from Wilde’s writings. He was the most successful playwright of late Victorian London, and a great celebrity of his day. A close observer of society Oscar honed his epigrams in conversation before putting them in the mouths of his characters. While making his audience laugh, he also made astute observations on human behavior. Shortly after The Importance of Being Earnest opened, a scandal and trial resulted in Oscar being convicted of “committing acts of gross indecency with other male persons”. Sentenced to two years of hard labor, Oscar emerged in broken health, impoverished and cut off from his family. He exiled himself to France and died three years later. His plays have never gone out of print and are regularly staged and filmed. Oscar Wilde’s pointed observations are as apt now as when he first put pen to paper.

Emily Martin has been exploring the relationship between format and content for many years in her studio work. She also teaches bookbinding and paper engineering classes at the University of Iowa Center for the Book. Martin often combines letterpress printed images and text with movable and/or sculptural book forms using a variety of traditional and experimental techniques. She has held artist’s residencies at a number of book centers, most recently as printer in residence at the Bodleian Libraries in Oxford, England in 2018. Martin lives and rides her bicycle in Iowa City, Iowa.

Emily J Martin – Oscar Wilde: In Earnest and Out