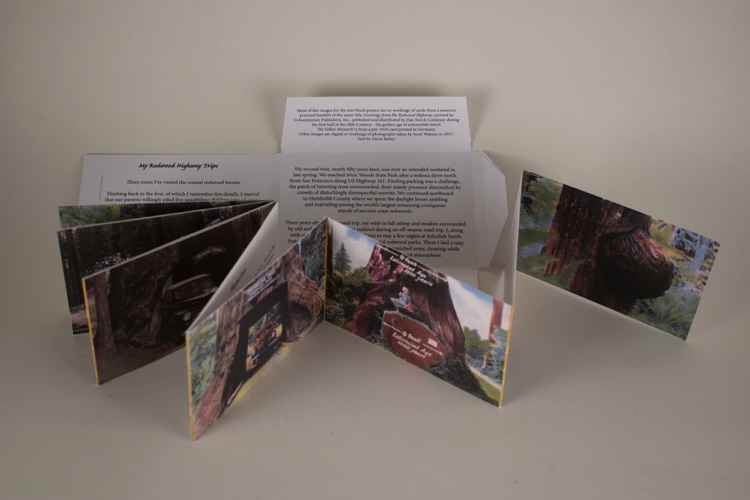 Greetings from the Redwood Highway is an accordion that pairs the format of postcard booklets, popular in the early 20th Century, with personal narrative and brief essays on the contemporary status of the areas depicted. The interior images were created using scans of original postcards ca. 1914-1935. The outer wrapper uses a contemporary photograph digitally manipulated to mimic early 20th century colortone postcards. Postcard booklets were especially popular from the 1940s through the 1970s, an era when you could put a postage stamp on just about anything and it would get to its addressee.

Alicia Bailey is a studio artist working across multiple disciplines. She has focused on book arts and assemblage since the mid-nineties, producing artists’ books, sculptural books and limited edition books. Alicia’s work embraces a wide variety of methods and materials. It has been featured in dozens of solo and group exhibits throughout the world and is held in numerous public, private and special collections. An archive of her work in the book arts is under development at Penrose Special Collections, University of Denver, Denver, Colorado.