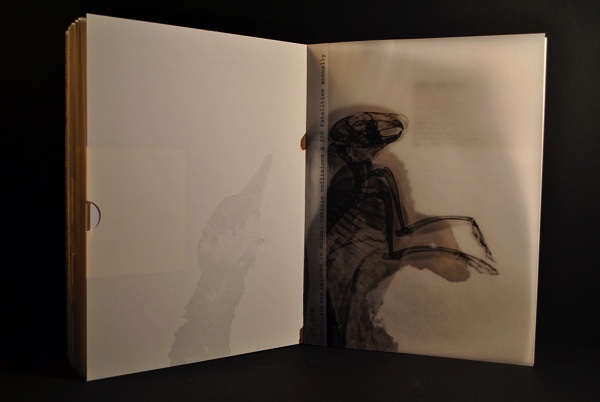 About this piece:
Still memorializes roadkill I encountered in the Upstate New York when I moved there from Chicago. I was overwhelmed with my daily encounter of roadkill. The book transforms into a creative non-fiction narrative allowing me to connect with my environment. The deceased animals were found on my daily commute and treated with respect. The book proceeds with an image of crows around an animal to represent the flight of their soul. Following is a pullout map indicating where animals were found. Animals were letterpress printed in two colors with linoleum blocks and polymer plates. A veterinarian allowed me to take xrays, which are printed on transparent paper with vertical text stating statistics about roadkill. Each animal has an obituary that states factual and humorous information with a pullout photograph showing the crime scene and the longitude and latitude. At the end of the project a private ceremony was held where the animals were buried on an island to pay respect & give thanks.

Jenna Rodriguez is currently the Victor Hammer Fellow at Wells Book Arts Center at Wells College in Aurora, New York where she teaches. She graduated from Columbia College Chicago in 2013 where she received a MFA in Interdisciplinary Book and Paper Arts. During this time she had a two-year print production fellowship for Journal of Artists Books (JAB) and taught letterpress printing classes at Columbia College and Spudnik Community Print Shop. Jenna received her BFA in 2009 in printmaking and photo media from Old Dominion University in Virginia where she grew up.