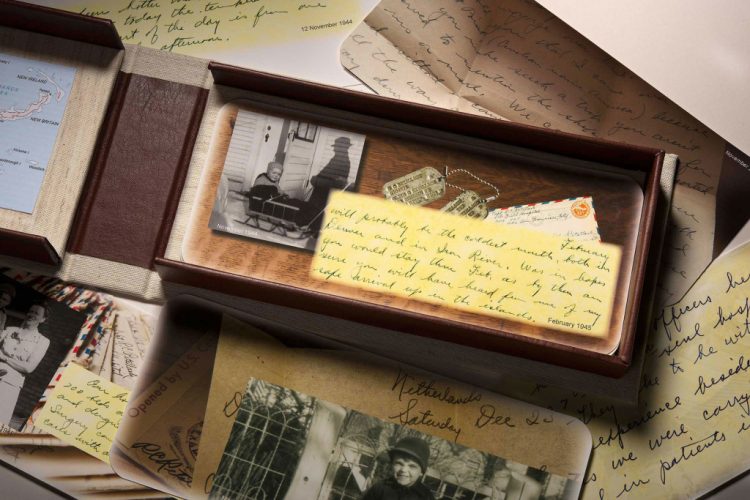 The text was scanned from letters to my mother (70 Total) covering dates September 1944 to February 1945 (the only ones I have). The pictures were scanned from small snapshots found in a album where Dad had kept them. The backgrounds used in some of the pages were created in studio. Text, pictures and backgrounds were assembled and printed from InDesign and printed to archival standards. The box was created with Canapetta Bookcloth and Flanders British Tan bonded leather, also to archival standards.

Dad was drafted in 1942. He was a surgeon. First he was sent to Texas to train with other doctors in an Army Hospital unit. Mom followed him there. When he as sent to the South Pacific she went back home to Michigan. For Christmas in 1944 she traveled to Denver to stay with relatives for a few months. Every day, as much as possible, they exchanged letters. Mom would enclose pictures, mostly of their new son, me, which he was eager to see. After their deaths, within a few months of each other, I found Dad’s letters and Mom’s pictures hidden in separate places. The pictures I examined immediately but held the letters for years before I was able to read them. This book is a tribute to the love, respect and longing I witnessed in the letters. This book created in 2014 over a period of about 3 months. I am responsible for all scanning, photography and assembly. After some deliberation I decided that the pages should be loose and in a box as the original letters and pictures were.

John Retallack is a photographer working and living in Rochester, NY doing both commercial and fine art work. His specialties include portraiture and still life. He has recently entered the book arts field, this book is his third. His commercial work has been seen nationally, his photographs have been exhibited nationally and locally.