View cart “Karen Kunc – Ten Thousand Things” has been added to your cart. 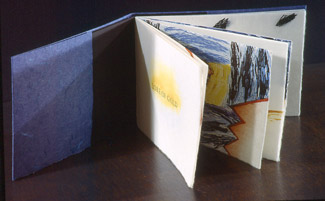 A pairing of early texts with Kunc’s contemporary art. The text is taken from three sources: “The Stone of the Philosophers, an undated 17th-century work by George Starkey; the Golden Tractate of Hermes Trismegistus (fourth or fifth century); and, Of the Nature of Things by Paracelsus (Theophrastus von Hohenheim) from 1650. All three concern the process of making gold.

“Now you shall understand that the Ancient Philosophers made division of the Water to separate it into four substances; one to two and three to one; the one third part of which is colour; which is a coagulating moisture; but the other two thirds are the Weights of the Wise.

“Take an ounce and a half of the humidity; and the midday Redness, the soul of gold, take a fourth part which is half an ounce. Of the citrine Seyre take similarly half an ounce. Of the Auripigment take half (which are eight) thus making a total of three ounces; and you must know that the Vine of the Wise is drawn forth in three, and the Wine of it is perfected in Thirty….”

Karen Kunc: “Text and full page woodcut illustrations alternate to create a vision and mystery surrounding the art of creation. Nature is animate within the medieval understanding and this contemporary imagery.”Karen Kunc is a professor at the University of Nebraska-Lincoln. She has taught workshops around the world and served as a visiting artist to over 100 institutions. Recognitions include: the 2007 Southern Graphics International Printmaker Emeritus Award and a Fulbright Scholar Award to Finland.

“My work as an artist/printmaker addresses issues of the landscape and our natural surroundings as direct influences from my Nebraska heritage, my daily experiences and viewpoints in the landscape of the plains and from extensive travel, and as artistic interpretation and contemplation on larger issues of the eternal life struggle, of endurance and vulnerability, growth and destruction.

“My prints suggest extremes of weather and natural forces at work, a sense of the micro/macrocosm, set against landscape or space, both wild and cultivated, intimate and unknowable. I am interested in the span of time it takes to wear away a canyon, build a mountain, the erosion forces that continually wash onto the plains, forming the earth, and, ultimately, shaping our world. My hope is that these larger concepts are provoked by viewing my work with a poetic and intelligent sense of wonder.

“My symbolic images are derived from a rich mix of instilled influences, born at home, and greatly expanded and contextualized from seeing life lived the world over, my experiences and past work, and issues in contemporary art. I recognize a host of associations that flow out of my work and are research interests for me – from nature and science, spiritual and religious thought, art historical and modern icons, immigration narratives and native myths.”

There are no reviews yet.

Be the first to review “Karen Kunc – Lore of Gold” Click here to cancel reply. 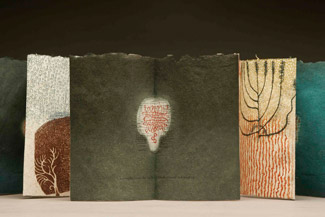