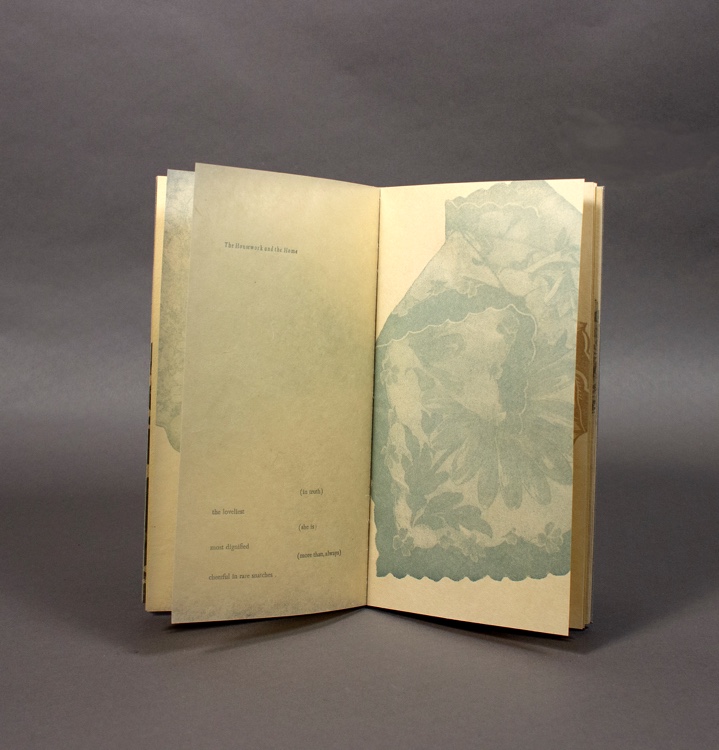 Fear is a Careful Plan is a set of ten erasure poems crafted from Abraham Myerson M.D.’s 1920 publication The Nervous Housewife. These poems explore the historic violence against women in the fields of healthcare and psychology by reimagining an early twentieth century text that was once believed to be scientifically accurate.
Through a contemporary poetic lens, Myerson’s musings have been cut apart and reassembled to reflect a contemporary perspective. Myerson’s faulty explanations for feminine anxiety and rage are broken down and agency is returned to those women dealing with the complexities of mental health.

Translucency is critical to shaping the voice of these poems; visible layers represent the multiple voices that overtime have had an impact on defining and treating women’s issues. Hand-set Joanna type is used. Joanna was designed by celebrated typographer Eric Gill, who is now understood to be a predator of women and children based on his confessional diaries.

The hand-set Joanna type creates an additional element of tension. Not only is the erasure itself using violent language, the letterforms themselves were designed by Eric Gill, who is now understood to be a predator of women and children based on his own diary admissions. Throughout the multiple layers of misogyny, the erasures create a distinctive, separate voice that works with language as a tool, rather than a weapon, to re-present the experience of womanhood in a culture obsessed with silencing and oppressing marginalized experiences.

The images are photopolymer halftone and linoleum cuts of handkerchiefs from my mother’s extensive collection. I have drawn and carved the reduction linoleum blocks by hand so they represent a truer expression of my understanding of the sentimentally significant handkerchiefs, a reference to heredity and femininity through time.

Katharine DeLamater is a hand papermaker and letterpress printer. Her research interests and artistic practice include collaboration in hand papermaking, paper in contemporary fine art, and the intersections of paper and print. She has taught bookbinding classes for the Madison Public Library BUBBLER program as well as printmaking classes at Polka! Press. She has interned at Dieu Donné Papermill and Pace Paper, and returned to Dieu Donné in 2018 as a summer research fellow. She is a third year MFA candidate at the University of Iowa Center for the Book.