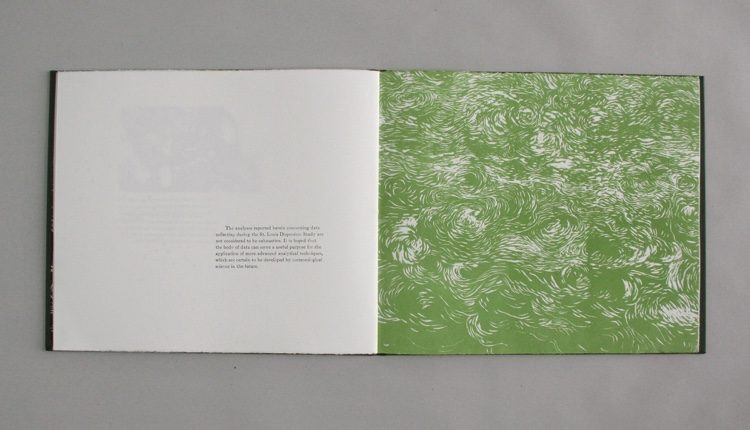 Smoke Screens is part of a body of work exploring the history of secret tests conducted in St. Louis, Missouri shortly after WWII, in which the U.S. Army worked with scientists to spray residential areas with zinc cadmium sulfide. Smoke Screens focuses on underlying themes of willful deception and complicit action related to military and scientific activity in the United States following WWII. The text through the book is taken from two previously classified government documents: Behavior of Aerosol Clouds within Cities and St. Louis Dispersion Study, Volume II – Analysis. See additional notes for more information.

These documents were released through Freedom of Information Act requests made by Dr. Lisa Martino-Taylor, Ph. D. They were published in the appendix of her dissertation, The Manhattan-Rochester Coalition, Research on the Health Effects of Radioactive Materials, and Tests on Vulnerable Populations without Consent in St. Louis, 1945 – 1970.

This book was made in an effort to raise awareness about the history of military-scientific activity in St. Louis, and its effects on the culture and environment, even to the present day. Currently, an underground fire in a St. Louis landfill is making its way toward the dump site of radiotoxic waste leftover from the atomic bomb. The reality of radioactive clouds contaminating the city is as much a danger today as it was in the 1950s.

This book was printed on a Vandercook press with handset type (unidentified but labeled Similar to Times New Roman) on Johannot paper. The images are printed woodcut and linolum cut relief prints.

About the artist:
resides in Denver, Colorado, United States
Kim Morski is a printmaking artist living and working in Denver. Her mixed media works on paper and limited edition artist books have been recognized by the 2014 Spudnik Press Studio Fellowship in Chicago, the 2012 St. Louis Artists’ Guild Printmaking Residency, the 2010 John T. Milliken Foreign Travel Scholarship, and the 2010 Nancy Spirtas Kranzberg Award for Outstanding Achievement in Book Design. Morski’s work has been exhibited nationally in solo and group shows at venues including: Sager Braudis Gallery, Printed Matter, and the Museum of Contemporary Art Detroit.