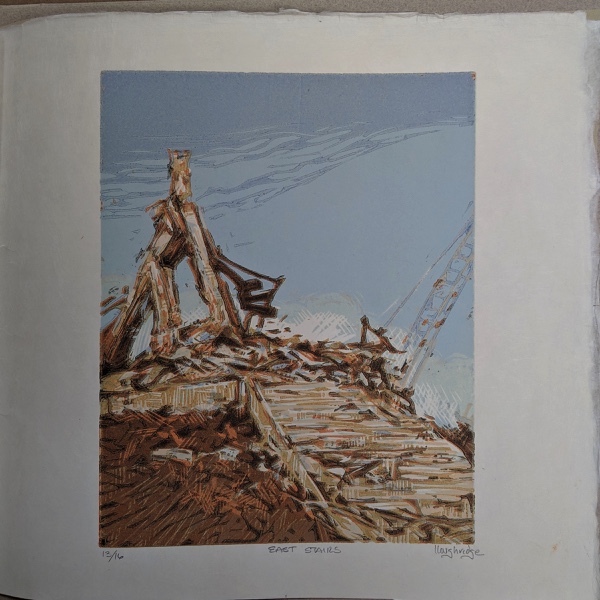 The demolition of the iconic McNichols Arena began in January, 2000. I had read about the demolition and decided to create daily sketches of the demise of the site that held so many memories. From those sketches, I developed 8 etch/woodblocks that I then incorporated into the bound book Views of McNichols.

Views of McNichols has 17 pages. There are 8 images which each have a facing translucent page with the date of the sketch and location. The images are woodblocks or a combination of woodblock and etching (polymer plate).

Raised on a ranch outside of Santa Fe, NM, Leon was influenced by his grandmother’s involvement in Northern New Mexico art circles, where he studied under Taos and Santa Fe artists. At age 15, his family moved to Colorado, the home of his great grandfather. Later study at the Colorado Institute of Art along with private study reinforced his abilities.
Stationed in Germany while in the army, he was able to travel extensively throughout Europe. In addition, he studied painting techniques of the old masters for two years, finishing by copying a Franz Hals at the Stuttgart Stattsgalerie Art Museum. Long having an interest in pen and ink, etching took on a special meaning from the museum’s collection of etchings.
Leon has continued to develop his printmaking skills and currently owns a publishing company that produces quality hand-printed art editions for artists and commercial vendors. He and his  wife also own a gilding studio producing and restoring hand carved gold leaf frames for museums and collectors.