View cart “Karen Kunc – Ephemera” has been added to your cart. 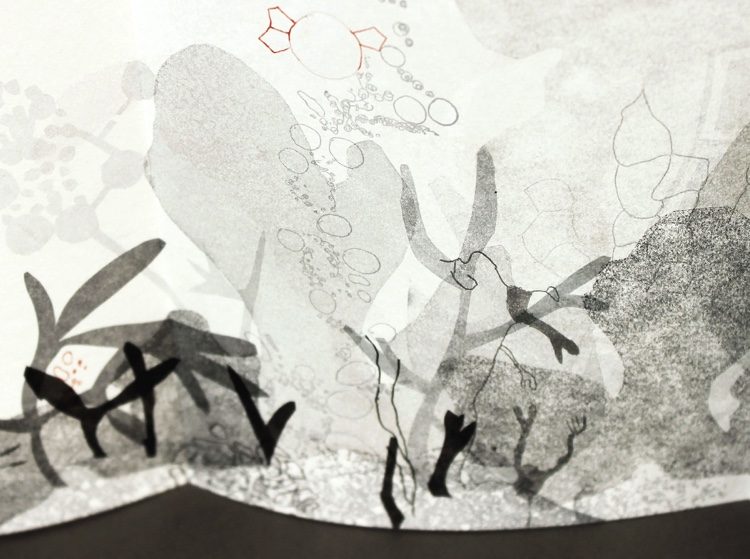 Hortus Conclusus, is a collaborative artist book project by artist Leslie Smith and Portuguese author Patricía Portela. While working together on a translation project the two planned an artist book. They chose fragments from Patricía’s novel, and arranged them into a bilingual prose poem. They set the text and mingled their sketchbook drawings to create imagery. The book is a wandering through a strange garden. The narrator advances with trepidation asking,

“If words were a physical substance… recorded in the mouth like the rings of a saliva tree. Would we be able to know what is left unsaid?”

The answer is a scene of dense overgrowth that the narrator and reader enter, discovering for themselves what is left unsaid. The text is printed from hand-set Joanna & Gill Sans types. Images were printed from linoleum blocks, hand-processed photopolymer plates and flexible printing plates. The papers are Zerkall Book and Canson. The book is bound in a Japanese Multisection binding.
Patrícia Portela (1974) is a writer and performance maker. She has studied set, costume design, film, and philosophy. Between 1994 and 2002 she worked as a costume designer and décor artist for independent companies and film-makers in Portugal, winning the 1994 Revelation Prize for her work. Since 2003 she has worked on her own collaborative performances and installations. She is the author of the novels Para Cima e Não Para Norte (2008) and Banquete (2012, shortlisted for the Grande Prémio de Romance e Novela APE. In 2013 she participated in the International Writers Program (IWP) at the University of Iowa. She was the IWP’s inaugural Outreach Fellow. She regularly lectures on dramaturgy at Forum Dança, in Lisbon, and at other institutions. She is one of the 5 finalists for the 2015 Prize Sonae/Chiado Museum for media art.
The two author and artist met in a translation class at the International Writer’s Program at the University of Iowa. The project came out of a translation project and a friendship. Both of them loved the very close collaboration and intend to work this way in the future. They are currently working on a book project about Gottfried Leibniz and his explanation of simple substances.

About the artist:
resides in Winston-Salem, North Carolina, United States
Leslie Smith makes drawings, prints, and books based on her interest in early modern natural philosophy and translation. She holds an MFA in Book Arts from the University of Iowa Center for the Book, and master’s degree in Library Science. Her interest in language and translation has lead to collaborative work with Portuguese author Patricía Portela. She is currently living in North Carolina anf working on a project, exploring early modern ideas about wonder and curiosity.