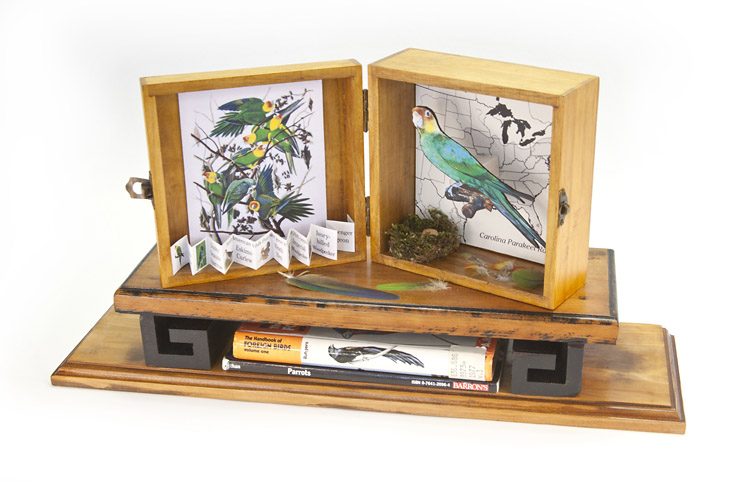 Last fall marked the 100th anniversary of the death in the Cincinnati Zoo of Martha, the last known passenger pigeon. It got me thinking about extinct birds. I had followed the search for any hint that the ivory-billed woodpecker was not extinct. I was dismayed to discover that the only North American conure (small parrot) was already extinct. There are seven North American birds that have gone extinct in the 20th Century (listed in the accordion book). This is the first in a series on North American birds that have gone extinct in the 20th Century. This piece is my homage to the Carolina parakeet and I dedicate it to Sunny and Dakota, the conures I live with.
I am influenced by Joseph Cornell. I like outsider artists such as Mose Tolliver and Earl Cunningham. I’m a largely self-taught artist. I like to use materials that are not usually used in art. And above all I love birds. The feathers on the piece are from my own conures.

Leslie Waygren grew up on the Jersey shore. Her many jobs have included boardwalk worker, typesetter, software tester, technical writer, and paraprofessional reference librarian. Leslie has been making artist books for more than a decade. She also paints and participates in mail art projects. She has been the registrar for the Focus on Book Arts conference since 2005. Her work has been shown in juried exhibits in Denver and Seattle, Portland and Eugene, Slidell, Louisiana , Purdue U. and Tallahassee. Her work is in collections at the Topeka Library and Western Michican University Library.