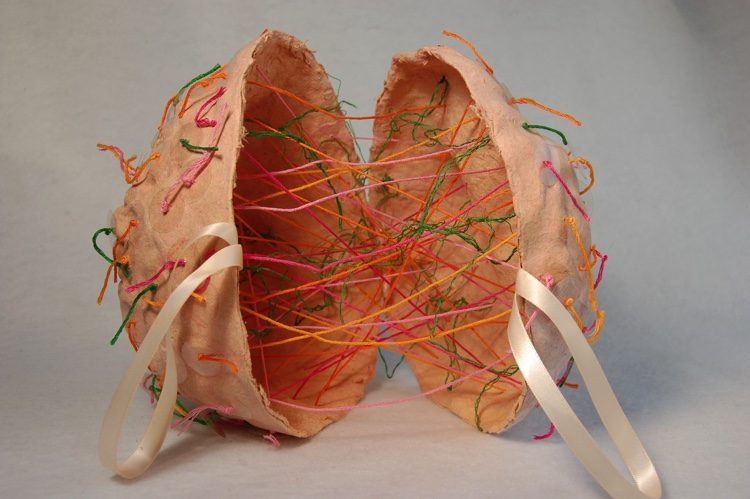 Several years ago, my son had a bad car crash which left him with a catastrophic brain injury. Diffuse Axonal Injury is one of two brain books in which I try to make visual his condition. There is no text; the broken threads tell the story.

I work in a store where we sell Halloween costumes and decorations. Left over after one Halloween, and put on sale, were some molds for making a jello brain. Walking by the table one day, I realized that I could cast paper pulp in the mold, but it was only for the top of the brain. I sculpted a clay brain bottom, which I then cast in plaster, then used the pulp in that. I needed something keep the threads from ripping through the cast; the plastic circles reminded me of the discs with the electrodes that were attached to his scalp for the many EEGs he had.

Lise Melhorn-Boe has been making and exhibiting books and sculptural book works for almost forty years. She studied at the University of Guelph and received her M.A. and M.F.A. degrees from Wayne State University in Detroit. Melhorn-Boe has exhibited widely across Canada and the United States as well as Europe and South America.

Her work is in several public and university collections including the Art Gallery of Ontario, the Canada Council Art Bank, Library and Archives Canada, the National Gallery in Ottawa, and the Museum of Modern Art in New York. 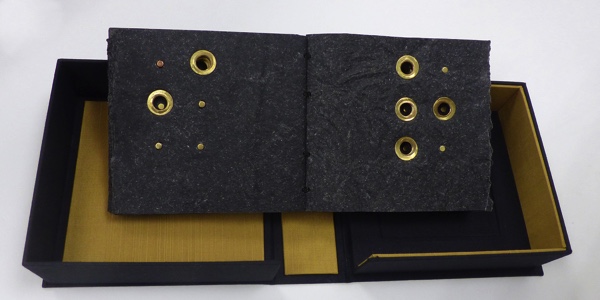 Autumn Thomas – If Only By Touch
0