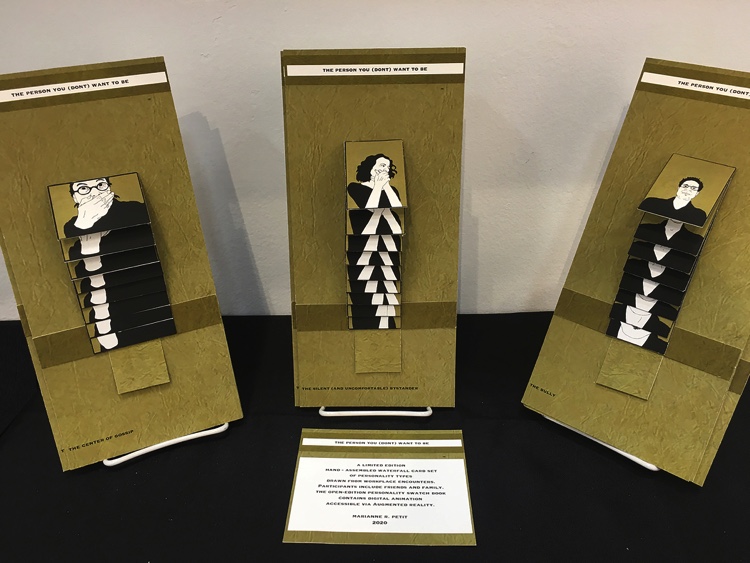 Marianne R. Petit – The Person You (Don’t) Want To Be

The Person You (Don’t) Want To Be is an anti-personality paper art kit. It contains two parts. The first is a limited-edition hand-assembled boxed set of 21 waterfall cards. The second is an open edition swatch book with a companion augmented reality (AR) app through which 21 short hand-drawn animations can be accessed. The app is available for free through both the App Store and Google Play.

The project began with a long list of personalities built over numerous workplace encounters. Participants selected a personality and recorded a short video of themselves performing the role. I then drew 8-14 frames from their videos to make short hand-drawn animations. The limited-edition boxed waterfall card contains 21 cards (and is an edition of 20) The swatch book is an open edition work.
The Person You (Don’t) Want to Be premiered at Art on Paper, as part of Vellum Projects at Vellum Magazine, Pier 36, New York NY, March 2020.

Marianne R. Petit is an artist and educator whose work explores fairy tales, anatomical obsessions, graphic and narrative medicine, as well as collective storytelling practices through mechanical books that combine animation and papercraft. Her interests are in combining technology, traditional book arts, and sequential storytelling practices to create new forms of narrative for the 21st century. Her artwork has appeared internationally in festivals and exhibitions, and her movable books can be found in numerous museum and library collections.

Marianne R. Petit – The Person You (Don’t) Want To Be