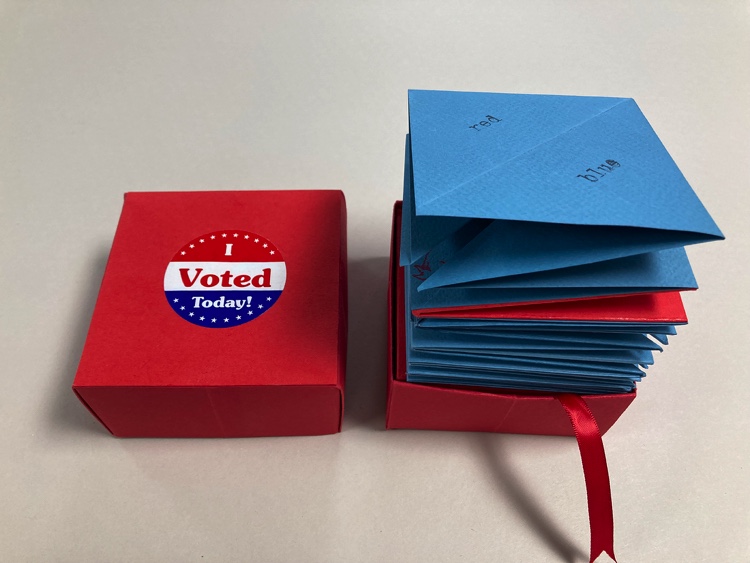 Touching on the 2020 election and now the efforts around voting rights, this piece echoes the children’s jack-in-the-box toy which originally was called “Diable en Boîte” which translates to devil in the box. This square format represents the toy, but also the larger square of the voting box, and the political arena. The folded pages inside use the Meandering Ox Plow and Lotus Fold variations with ColorPlan and Fabriano Tiziano papers in red and blue to represent the political sides fighting back and forth. The square, when folded, becomes a harlequin pattern of the circus and the mascot images of the political parties transform into circus characters with words and images intertwining. The piece is presented in four sections that twist what the two parties represent and the symbolism and attitudes that surround the politics.

The images and words are ink stamps from the 1930s and a few contemporary ones as well.

Richard is the Chair of the Charles Altshul Book Arts Program and studio manager at Maine Media Workshops where he develops programming for wide ranging faculty and himself teaches workshops in letterpress printing, bookbinding, case/box construction and paper creation. He has also taught at other higher ed institutions nationally.
His work has broad conceptual reach that touch on nature, psychology, memory and sometimes touches on political themes.