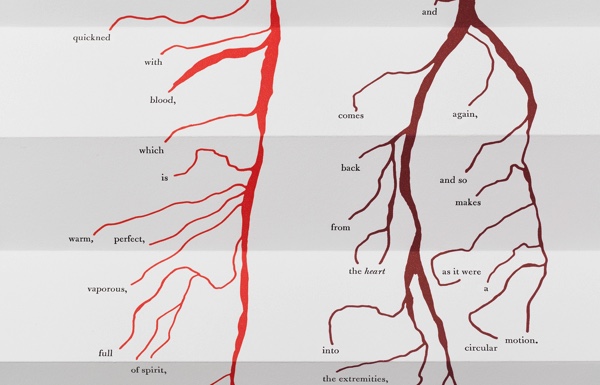 Connections between words within a phrase are usually represented in
linguistics as abstract branching diagrams. In the physical world, there are
numerous natural systems that have branching forms, one of which I used as the
model for this project. In 1628, William Harvey published a landmark text
concerning the circulation of blood in the body, Exercitatio anatomica de motu
cordis et sanguinis in animalibus, usually called simply De motu cordis. Excerpts
from this text are diagrammed here in forms suggestive both of blood vessels
and of the syntax underlying the words that Harvey used to describe them.

Text excerpt used:
In the body all the parts are nourished, cherished, and quickned [sic] with blood,
which is warm, perfect, vaporous, full of spirit, and that I may so say,
alimentative. / It doth go round, is returned, thrust forward, and comes back from the heart into the extremities, and from thence into the heart again, and so
makes as it were a circular motion.

About the artist:
Born in Oklahoma City, Oklahoma, Sarah Hulsey grew up in St. Louis, Missouri.
Her interest in pursuing art first emerged with an undergraduate job in the Study
Room for Prints, Drawings, and Photographs at the Fogg Art Museum. This
experience, along with two years of letterpress instruction at the Bow & Arrow
Press, awakened her to the artistic and conceptual potential of printmaking.
Hulsey’s pursuit of art deepened over the next decade, parallel to her studies in
Linguistics, first at Harvard, and later in graduate school at Massachusetts
Institute of Technology. As she learned more about the depth and complexity of
the structure of language, she became more and more drawn to the possibility of
representing these structures through visual art. In 2011, she enrolled in an MFA
program in Book Arts and Printmaking at the University of the Arts in
Philadelphia. There she developed her ideas about the visual possibilities
inherent in language into a practice of printmaking, installation, and book arts.
She was awarded the 2016 Walter Feldman Fellowship for Emerging Artists in
New England. She lives and works in Somerville, Massachusetts. 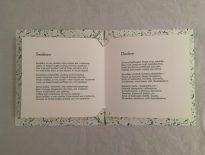 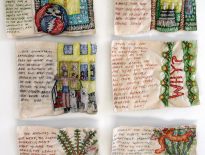