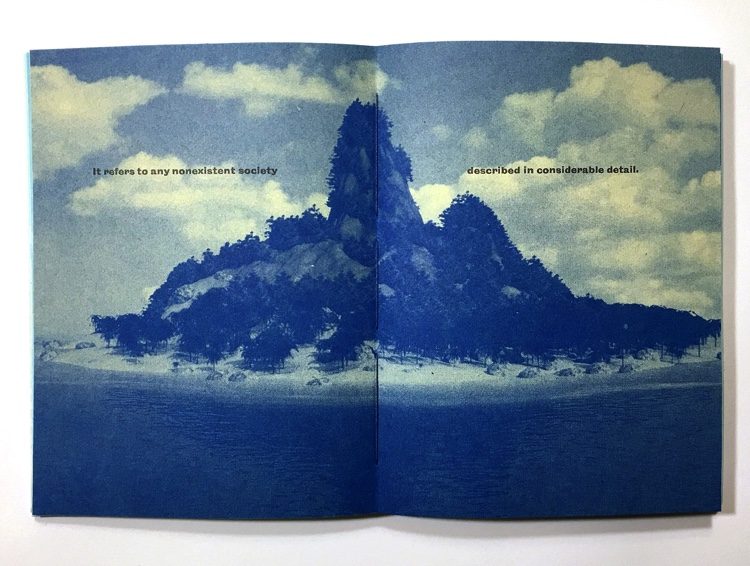 This book is about islands, both real and imagined, that are in the process of disappearing, and the stories that we tell ourselves about them. The book begins with utopian speculation, and then turns to the very real islands of Nauru and the Marshall Islands in the South Pacific, both places under immediate threat from climate change. Solastalgia considers why remote miniature worlds surrounded by water are sites for both exploitation and imagination.

Solastalgia is a term coined over a decade ago by Australian professor of sustainability Glenn Albrecht, which he defined as “the pain experienced when there is recognition that the place where one resides and that one loves is under immedi­ate assault … a form of homesickness one gets when one is still at home.” He originally described this emotion as being familiar to people who lived in sacrifice zones— lands decimated by open-pit mining, or clear-cut logging. But it is quickly becoming, in an era defined by climate change, a universal human experience.

Printed on a risograph and a Vandercook Universal I, using metal type, pressure prints, woodcut, linocut, and polymer plates on a variety of French Paper Company papers and glassine. Bound in a sewn boards structure, foil stamping on the spine and cover. Housed in a custom slipcase. 172 pages.

Sarah Nicholls is an artist, printmaker, and writer whose work combines language, image, visual narrative, and time in research-based prints, books, and events. Since 2010 she has published a series of letterpress printed pamphlets, which focus on topics such as climate change, urban ecology, the history of science and technology, and alternative economies. She teaches at Pratt Institute, Parsons School of Design, and the University of the Arts. Her work has received support from the Lower Manhattan Cultural Council, the Brooklyn Arts Council, and the Puffin Foundation.