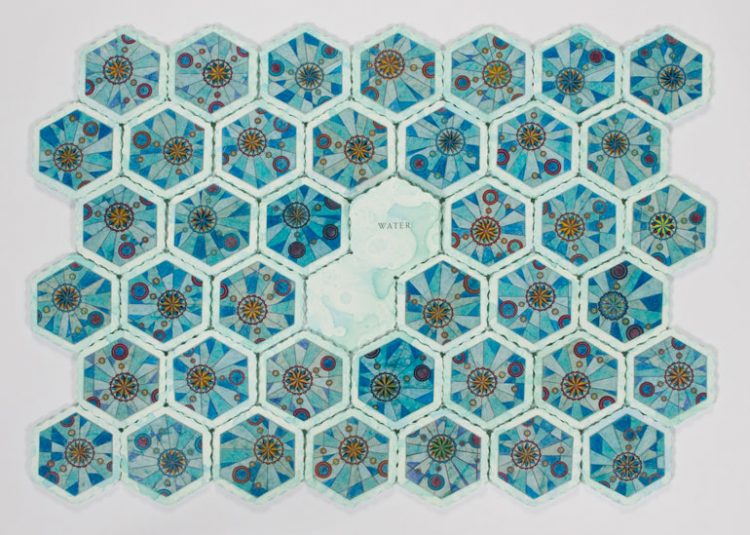 Water – more precisely, H2O – changes between liquid, solid and gas easily. In this book of poems, poet and transgender activist Emily Newberry celebrates the two forms – rain & snow – that have a very direct impact on our wellbeing. But beyond that, the fluidity with which water changes can also be interpreted as a metaphor for the complexity and fluidity of identities, and Newberry addresses this more succinctly with a second poem. | |Using the meandering structure with hexagonal pages, the book forms a whirlpool when fully opened. The structure allows the poem to be read in the round; text of the poem is letterpress printed. On the reverse side, text of the second poem is silkscreen printed with the Print Gocco. Each book is uniquely hand-painted, and each pattern is a variation around the theme of water, molecule, and navigating through our complicated and nuanced world. The back covers are Gocco printed with an illustration of H2O as it changes from solid to liquid to gas. |

Born and raised in Taiwan, Shu-Ju Wang settled in Portland, Oregon after stays in Saudi Arabia, California, and New Jersey. Trained as a engineer, she started taking classes at Oregon College of Art & Craft while working on engineering projects at Tektronix. In 2000, she left the high tech industry to become a full time studio artist working in painting, artist’s books and installations. Her work focuses on the profound and sometimes catastrophic transformations of our lives. Using multiple voices and points of views, she addresses issues such as immigration, the environment, as well as health, aging and dementia. | |Her artist’s books are in private and public collections, including the Brooklyn Museum, Yale University and many others. She has been featured in the New York Times, the Oregonian and other regional and national publications.