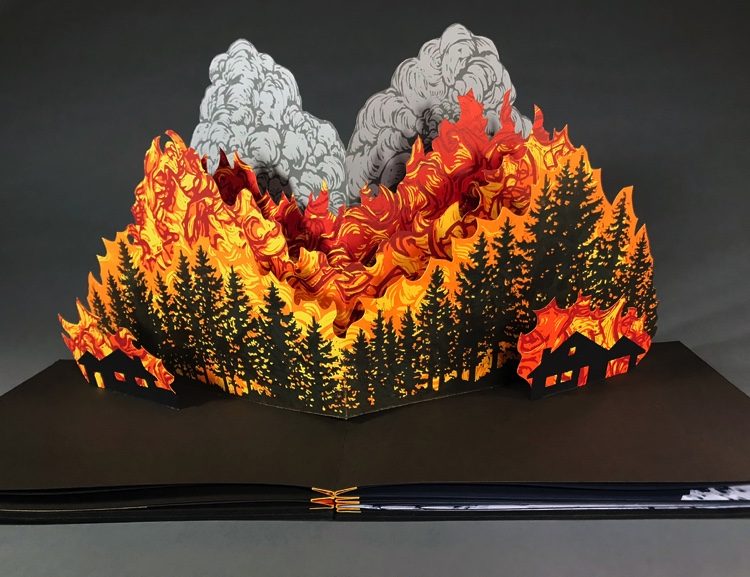 Susan Lowdermilk – You Cannot Put a Fire Out

You Cannot Put a Fire Out is a pop-up book using woodcut imagery and laser cut text. It was created as my response our current and increasing climate instability due to increased levels of atmospheric carbon dioxide produced by our use of fossil fuels, and that we are ultimately defenseless against powerful natural forces.

2018 was the deadliest and most destructive wildfire season in California history. The “Camp Fire” destroyed the city of Paradise in Northern California on November 8, 2108. The 2018 Atlantic hurricane season was the third in a consecutive series of above average and damaging Atlantic hurricane seasons, featuring 15 named storms, 8 hurricanes, and 2 major hurricanes. On September 5, Florence became the first major hurricane of the season. My woodcut images are modeled after the wildfire in Paradise and Hurricane Florence.

Susan Lowdermilk is a book artist and printmaker. She creates hand bound artist’s books involving movable parts, pop-ups. She works in traditional print processes and uses digital media where necessary. She is a professor at Lane Community College in Eugene, Oregon. Additionally she teaches workshops in artist’s books, paper engineering and printmaking. Her work has been collected by over 60 public institutions worldwide and is represented in galleries throughout the United States. She earned her Master’s of Fine Art from the University of Oregon in Eugene, and her Bachelor’s of Fine Art from Colorado State University in Fort Collins.

Susan Lowdermilk – You Cannot Put a Fire Out