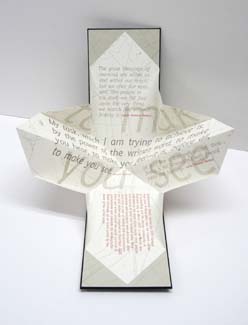 To Make You See was created for The Al Mutanabbi Street Book Arts Coalition Project.  It contains quotes of Joseph Conrad, English novelist of Polish descent (b. 1857- d. 1921), and Lucius Annaes Seneca, Roman philosopher (circa 4 BC – AD 65). Conrad remarked on the power of the written word to invoke awareness and Seneca remarked on the search for meaning as well as grieving, or allowing tears to fall, as a method for finding inner peace. The quotes overlay a map of Baghdad including the Al-Mutanabbi Street area and were chosen for their connection to the importance of books and reading as common ground for all people as well as to highlight Seneca’s advice to allow ourselves to grieve as a method for achieving harmony as opposed to conjuring violence. 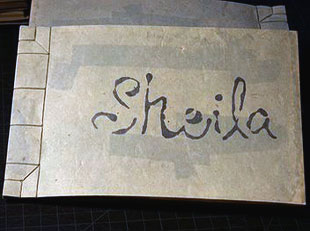