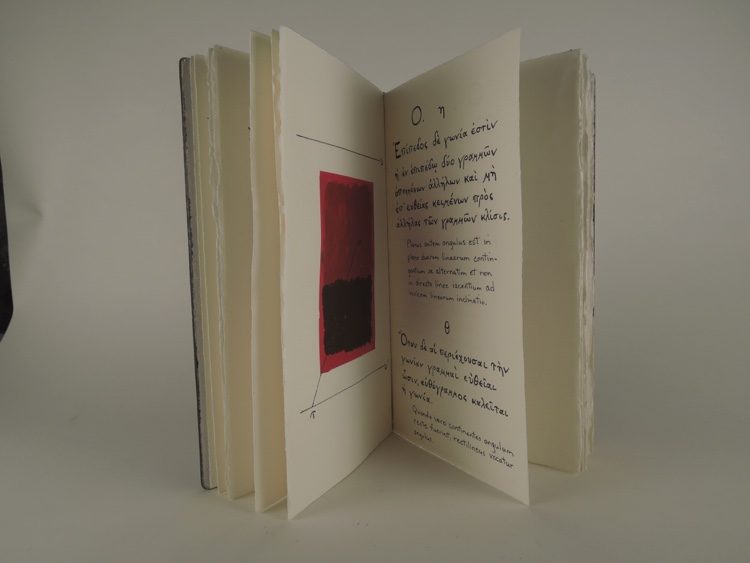 Euclid explicat Rothko is an attempt to apply some of Euclid’s Geometry principles to the paintings of Mark Rothko. Euclid, considered the father of Geometry, was active in Alexandria during the reign of Ptolemy I in the mid-fourth to mid-third centuries BCE. Rothko was a Russian American painter who died in 1970. Seeing his later paintings side by side, one is struck by the generally large squares and rectangles of color and light, some with rectangular borders and lines separating colors. My primitive tiny imitations convey none of the above, nor of the feeling of standing before one of his large paintings. Each of my images has a common notion or definition from Euclid’s The Elements, Book 1, written in Greek and Latin as well as diagrams of said notion or definition on the painting. Though the precision of the euclidean system is not found in the work of Rothko, one can claim that Rothko used Euclid’s geometry in the manner we call “abstraction”.

Ted’s serious interest in art began during a ten-year stay in Paris where he took advantage of classes offered in his neighborhood. Later, as an academic librarian at the Marriott Library, University of Utah, he was introduced to the Book Arts by Madelyn Garrett. Mentored by Madelyn and inspired by Claire Van Vliet and Barbara Mauriello, he took advantage of many classes offered there. Since his retirement, he has continued to pursue projects combining painting and bookmaking. 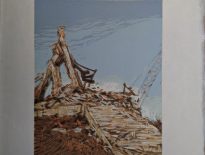 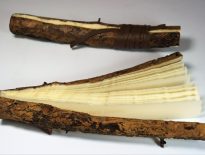