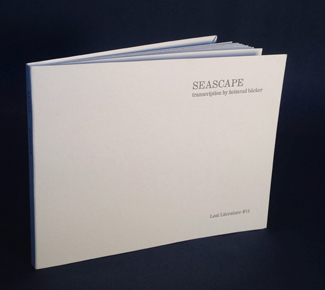 Heimrad Bícker’s Seascape (originally published as Seestíck for the 32nd issue of the journal neue texte in 1985 in Austria) was translated by Patrick Greaney and published by UDP in 2013 as part of the Lost Literature Series. Printed letterpress, with an offset text insert, Seascape uses documentary material to recount a minor historical episode from World War II: the crew of a German submarine comes upon three men on a Norwegian lifeboat and refuses to take them on board.

Ugly Duckling Presse is a nonprofit art and publishing organization whose mission is to produce artisanal and trade editions of new poetry, translation, experimental nonfiction, performance texts, and books by artists. With a volunteer editorial collective of artists and writers at its heart, UDP grew out of a 1990s zine into a Brooklyn-based small press that has published more than 200 titles to date, with an editorial office and letterpress workshop in the Old American Can Factory in Gowanus.