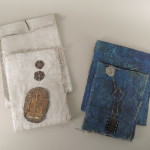 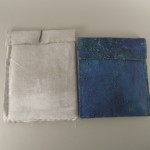 I have in front of me two books by Beata Wehr; Blue Book About the Past and Book 83: More Stories on Time. Both are crafted from rough weave fabric and housed in fabric envelopes of the same. 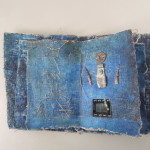 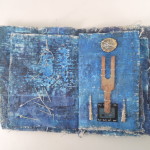 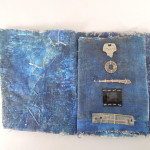 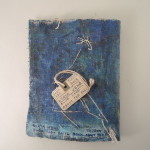 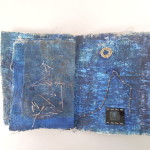 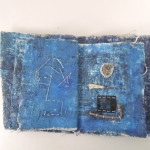 Blue Book About the Past is indeed blue, the outside of the envelope treated with surface texture that is reminiscent of moon surface or dimensional relief maps, perhaps a bumpy road stained blue.  Even without knowing the title, the combination of uneven exterior, slight heft to the package as a whole and the round-cornered flap hint that the envelope might house something about time.  Its hand-hewn flap-pouch shape and simple stitching give it a feel of having been in a traveler’s backpack of a fictional long ago.

The book is also blue and roughly fashioned with irregularly-cut rectangular pages of blue-painted and stiffened linen canvas.  Although the indigo blue could be made naturally, thus lending to the idea that this is an old object, both the plastic-coated sheen to the pages and the deliberately placed and stitched objects within point to its modern-totem nature.   Because of its irregular and purely object-oriented nature lacking any description, it’s easy to imagine the book as made by someone other than Ms. Wehr and that she is presenting this as a found object.

Each facing page, including the cover acting as a first page, contain objects one might find in an alleyway or abandoned desert gas station:  bent and deeply scratched metal pieces from something mechanical, part of a key, washers and some sort of sharp thorn or quill, are roughly sewn in compositions that appear on some pages as simple landscapes.   On the first and last pages old bottle caps are placed that can be read as a sun or moon, floating above old wire forming a middle ground that can be read as a figure or landscape feature.   Other pages have the objects placed one after the other, creating a sort of language or catalog of the objects. The pages easily read as shrine-like collections, perhaps hailing a past that the maker holds as something to revere.  Every page also contains one frame of a 35 mm negative strip, sewn to the pages through the existing holes in the strips.

The simple objects included in this book, apparently found on the ground as forgotten or discarded objects, could have been lovingly collected by someone in a future devoid of these things we take for granted.  The 35 mm negative frames sit on each page as a reminder of something recorded, person or moment, that can’t actually be seen as the negatives are stitched on the dark blue background and many of the negatives are deliberately scratched or smudged.  This adds to the idea that the maker is collecting tokens of time.  The fact that the negatives contain images seems unimportant.

On the backside of each page, the stitching of the linen thread used to secure the objects to the front forms a sort of constellation map or marks that might form a code or language used to describe the contents on the facing page.   That the stitches are not perfectly spaced or disguised makes them an important part of the double page spread’s composition.  They face the objects and stand as interpretive marks or balancing design components. 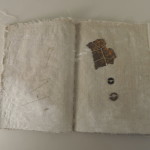 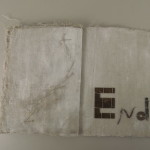 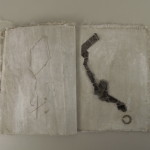 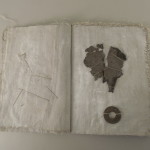 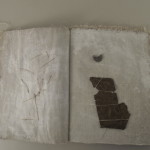 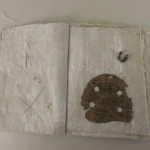 Book 83.  More Stories on Time is also housed in a  fabric envelope, this one of a finer weave, natural color. The construction is as simple as an envelope can be: one side folded rather than stitched as someone would do if they were in a hurry or had few resources.  Unfinished fabric edges are left to fray more over time, only stitched as much as is necessary to hold together.  The same is true for the book within, made of the same unbleached rough cloth, treated with a stiffener that gives the book the feeling of having been through something.

As in Blue Book About the Past, Ms. Wehr has treated the cover as first page, making it eight pages total.  It is similar to the other book in that seemingly discarded and run-over metal objects or pieces of objects are stitched in place, with their placement creating a kind of language or pictures-with-meaning.  The similarity ends there for a few reasons.  One is that the final page spells the word “End” out of metal pieces and wire.  Because of this, the book has the feeling of a story told by someone familiar with the story form and who is telling her story in a new way but with old objects.

Because the only object that repeats throughout the book are old metal washers, there isn’t the feeling of precious collection here.  Each page forms its own sparse meaning, determined by each viewer’s experience.  The objects are so simple:  in one case what appears to be half the base of an iron and a small “u” shaped piece of metal float together on a single fabric page, sewn on with only eight stitches total so that they’re barely hanging on.  There isn’t a universal meaning here but plenty of meaning could be made.

Both books work with the idea of time and allow the viewer plenty of latitude to assign their own meaning.   Both combine man-made materials with natural ones or the allusion to natural materials and both allow the viewer to make meaning without any clearly defined rules.

View all posts by Paula Slick →
Cosmeceutical Collection by Alicia Bailey
Casey Gardner – Matter, Anti-Matter and So Forth 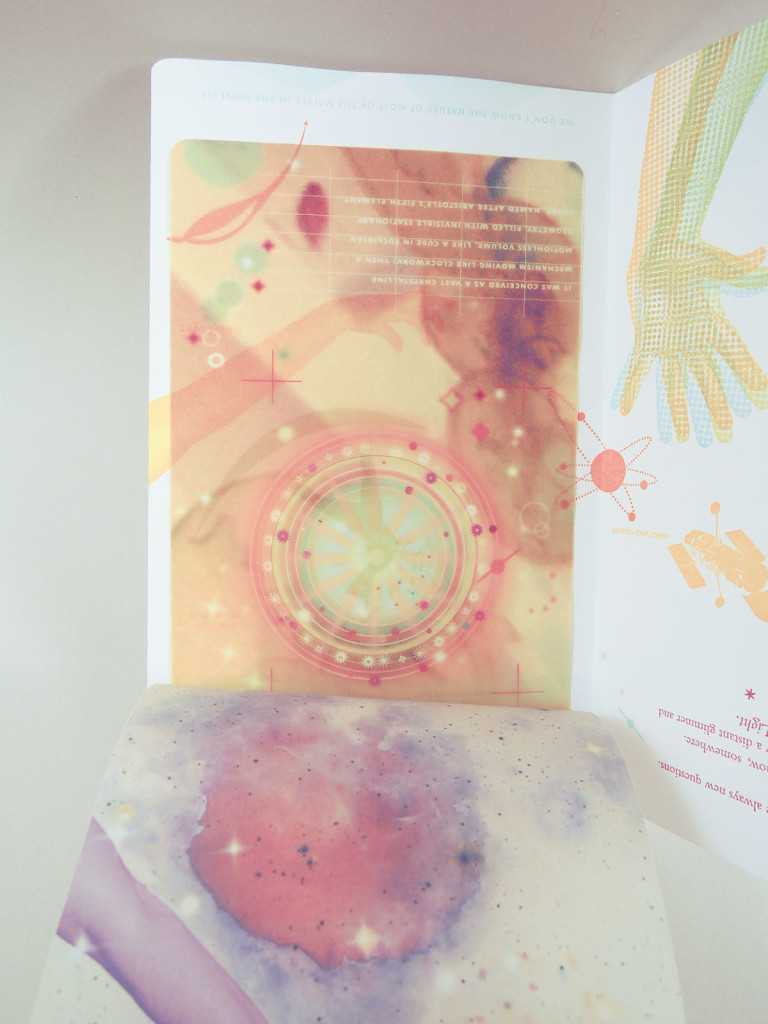