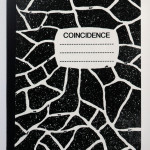 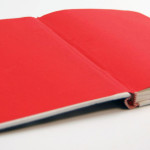 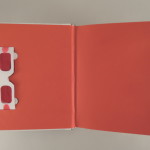 Perhaps the most recognizable and definitive of school supplies is the composition book. This ubiquitous, bound notebook with typically wide ruled pages was an easy way to take notes or jot down information in classes—at least, for those of us used to pen and paper more than computers and typing. Candace Hicks deploys this schoolbook as a visual language in Coincidence. Just a bit thicker, perhaps a bit larger than the one we are used to, this composition-style work instantly assures the viewer that what they are about to encounter is going to be a handwritten, unique experience.

Upon initial examination, the outer cover of the book is similar to the most traditional of composition books, black with white cracks. These bits of white mimic the tunnels of ant farms (another school staple). Small ants crawl around, curiously searching for something; these creatures march onwards inside, as the audience soon sees. Once opened, the inner pages of Coincidence are a simple but bold red. Nestled on the left cover are red tinted glasses, like the disposable 3D kind, though they do not recreate that three-dimensional effect per se. The lenses are solely, emphatically red; once put on, everything is strongly colored to that shade. These glasses are a portal to a secret message, which we’ll get to shortly.

Taking the glasses off again, the viewer turns the page to the beginning of the book. Here, Hicks has used what looks to be her own handwriting in black ink (replicated in printing) to discuss coincidences. Looking closely, the blue lines of the pages, are actually made of small ants moving in formation. So is the red margin line, both easy to miss without alert attentiveness. Continuing this scholastic theme, “corrections” are made to the text via red ink, the go-to correction pen, pluralizing some words and making other minor adjustments. This simple color scheme of black, red, and the faded blue emphasize and focus the audience’s attention on the text, or story, within the pages. 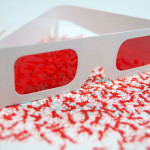 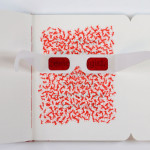 Hicks reviews coincidences, or rather, a series of flukes that have clearly affected her in some way. Written almost in a stream of consciousness listing style, she starts by mentioning that these chance accidents tend to come in pairs—and then she’s off. We read about the anatomist murders in 1828 Edinburgh and how the two books she read depict the murderers in varying ways (one sympathetic, the other cruel), then to Napoleon’s wallpaper, its arsenic content, and the incorrect link to his demise. This portion of the book flows in this manner, a series of events that link together, hopping around history, literature, mythology, the everyday mundane, movies, and much more. 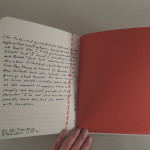 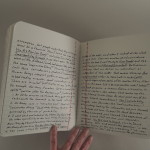 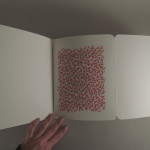 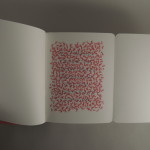 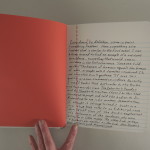 In some way, it feels as though Hicks, by describing this familiar yet intangible phenomenon, is trying to be open or welcoming to the universe in order to experience these accidents. These incessant links are listed breathlessly but matter-of-factly as she recounts each paired set. At one point, she mentions apophenia, which is “the experience of seeing patterns or connections in random or meaningless data.” She reads about this in a book and then immediately hears about it on Radiolab, a radio broadcast on science in everyday life. This cheeky association shows Hicks’ humor and self-awareness as she carries on with her task, relentlessly enumerating. As if to bolster her examination of coincidences, she adds footnotes to some pages, another academic reference. Finally, as if spent, the book ends with a last correlation and no explanation or summation of what has come before.

But what about the red glasses? This is where the viewer can giddily feel as if they are reading hidden code in invisible ink—because in a way, they are. In between the pages on coincidences are foldout pages; when the viewer pulls out the page, they see a series of ants creeping in haphazard formation. With the glasses on however, the true purpose is revealed. Each foldout tells part of a story, which goes thusly: famed etymologist E. O. Wilson discovers that ants use chemicals to communicate. He figures out how to chemically respond, directing them to “follow me,” then painstakingly collected these chemicals from the ants. Using these pheromones, Wilson writes his name, and the ants line up to create the font, which the final foldout presents. This linkage between hidden messages, ants, connection, and more all underline the purpose of Hicks’ work: coincidences and making sense of fragmentation. Swirling, eager, and somewhat surreal, Coincidence is a rousing exploration of a variety of media and life in general. 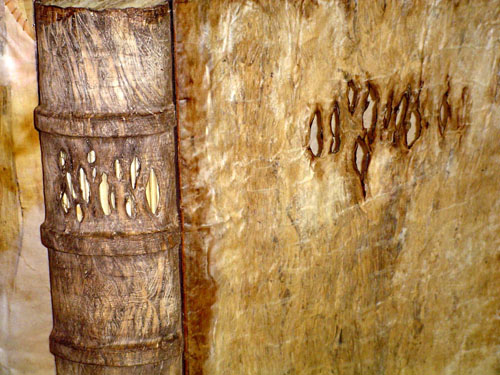 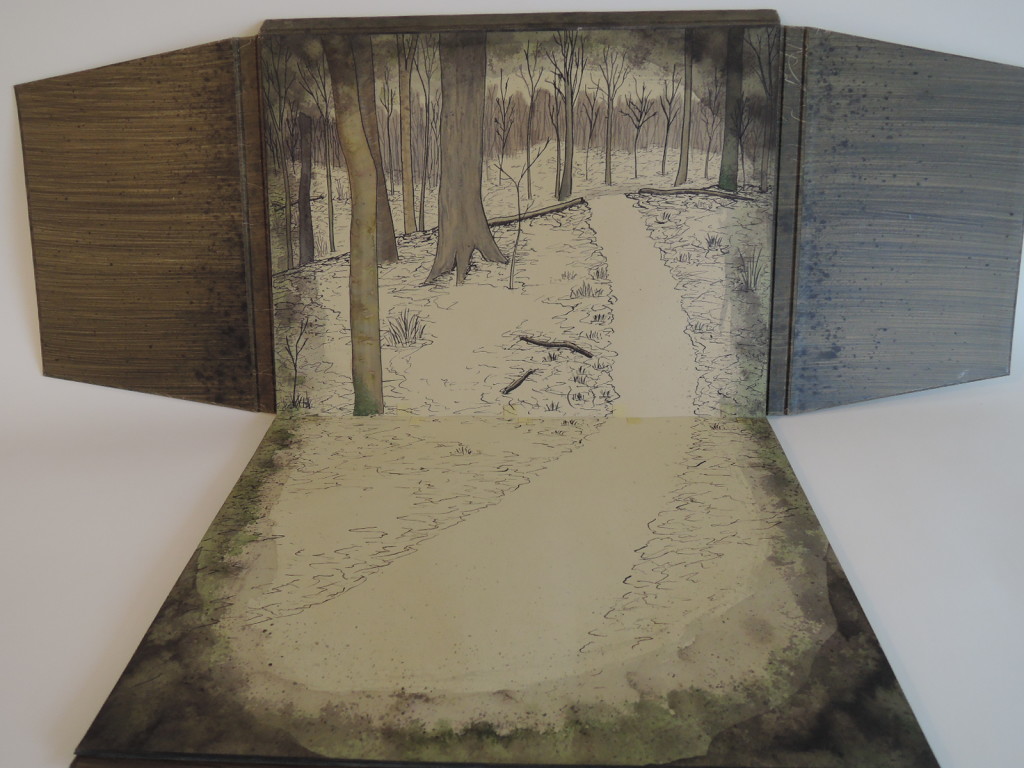