Americans have been parasitically entwined with the Western landscape through oil for over a century, developing in time to its own mythology. Whipstock by AB Gorham is a curious puzzle devoted to this lore. A considered experimental piece, it lyrically examines the way oil has seeped into our land, our economy, our history, and our lives. 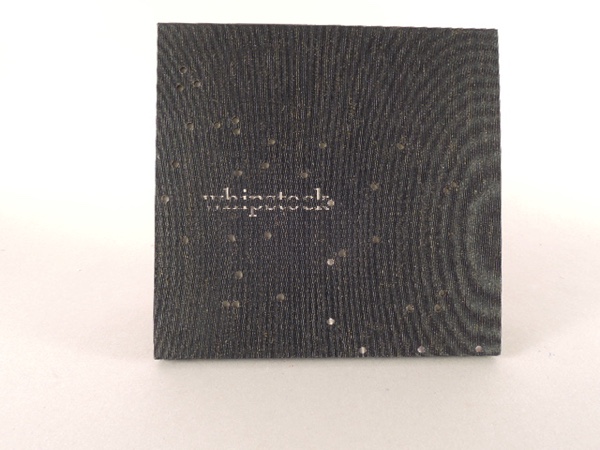 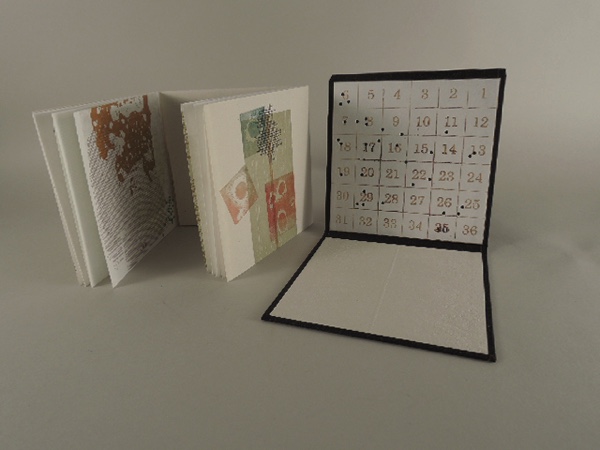 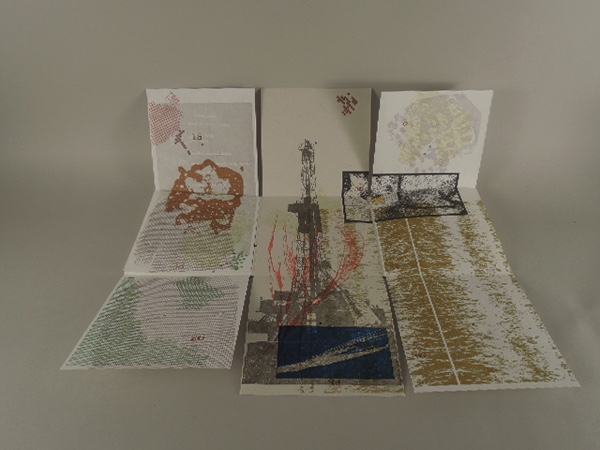 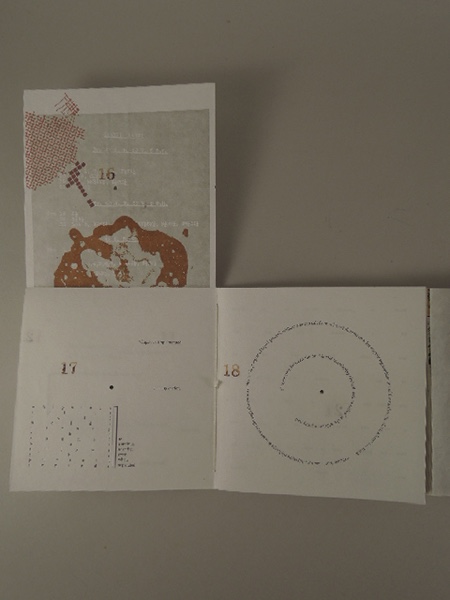 Roughly the size of a CD outside its outer casing, Whipstock unfolds with booklet flaps left and right; each booklet is connected at the middle and unfolds both horizontally and vertically. Within the handsome outer case, there is a series of numbers 1-36 that snake through in rows (reading let to right, right to left), punctuated with small holes. These holes pepper the booklets at various points, almost mimicking a drill piercing through the dirt. “Oil,” or rather small blobs of brown ink, are interspersed throughout, much like a miniature spill soaking into various pages. The numbers appear again within the booklets, and they are a guide for reading Whipstock in an order, although one could easily read without that direction. Finally, the case cover contains imprints of imagery that repeats later in the book without color, appearing to be linked to drilling.

These numbers force the reader to “dig” through the work; one might start right and discover the next number is on the opposing booklet. One could also flip the pages like a traditional book, but then be flummoxed by the next number disappearing—or rather, this trail pushes the reader to alter how they have read thus far by unfolding vertically. Gorham is quite strategic in this layout, deploying a metaphor of burrowing and uncovering while engaging with the work.

And now, the content of the pages: Whipstock is a mostly linear yet stream of consciousness/poetic rendering of the history of oil production, from the geologic to more intimate human-scale concerns. Even within pages, it can be challenging to know what to read first, and each reading can be unique. Words are placed in a circular fashion, as lists, diagonal, upside down, and sometimes as shapes. They are as much words as pattern, and the reader needs to turn and move the book to really be able to read in full. Whipstock is not a passive engagement to say the least!

This language encompasses all aspects of oil, such as legalese on the vagaries of oil production detailed in #13. There are two columns side by side with the right repeating the left column’s words but crossing out sections, leaving the reader to ponder the significance of this directed act of partial removal. Elsewhere, the penetration of the ground is vividly described as in #19: In #29, we get a brief but incisive list of uses for oil besides heating and transportation; mundane items like nail polish, footballs, and the “ink on these pages” occur. This crucial inventory shows how interconnected we are to oil in every facet of modern life, whether we are aware or not. Prior to this is entry #28, which details a pipe bursting and leaking into farmland soil; Gorham seems to be demonstrating the dependence of oil in this country is not without ecological consequences.

Continuing through the book, the destruction inherent to oil production is pursued further in #32:

Oil is everywhere, and despite its origination in the deep earth from dinosaur bodies and ancient flora, the toxic outcomes are far from natural. We see this accentuated in oil daubs such as #33, which also spreads over small grids. Are these fences? Or perhaps farms? A muted, earthy color palette of dulled greens and browns compliment the focus of land, and the shapes within these printed imagery shift between abstract and exact, much in the same way language is used throughout Whipstock.

As a climax of all this flowing rumination on oil in the West, the very instrument of removing oil from the earth is at last displayed: a brightly colored oil derrick, prominent and direct in pages #34 and #36. There are wheat plants printed over sections, suggesting a relationship: rising wheat, rising derrick, with wheat superseding and overlaying the derrick, signifying its dominant importance. The interplay underlines our manipulation of the earth towards our own ends, regardless of cost. AB Gorham has created an interrogative work on the depth of human intervention in the land, leaving the readers questioning their complicity in this and just how much the oil industry’s positives outweigh some disastrous negatives. 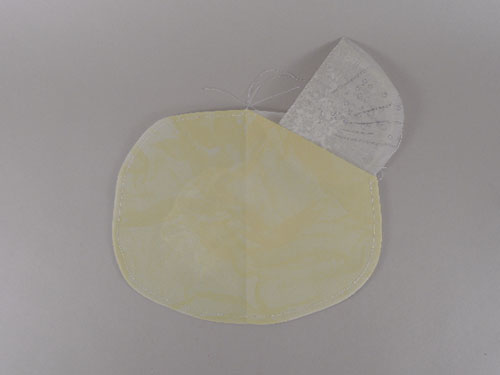