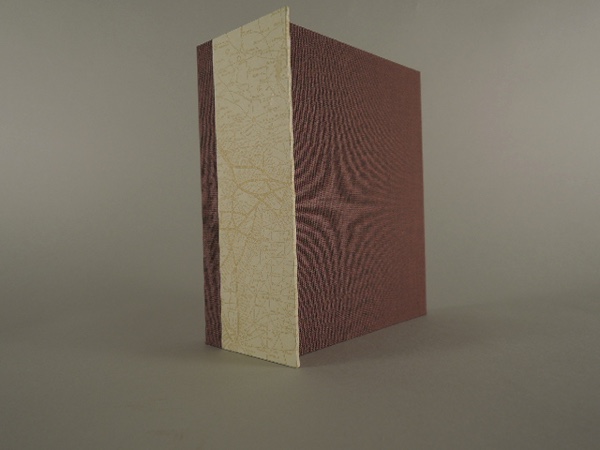 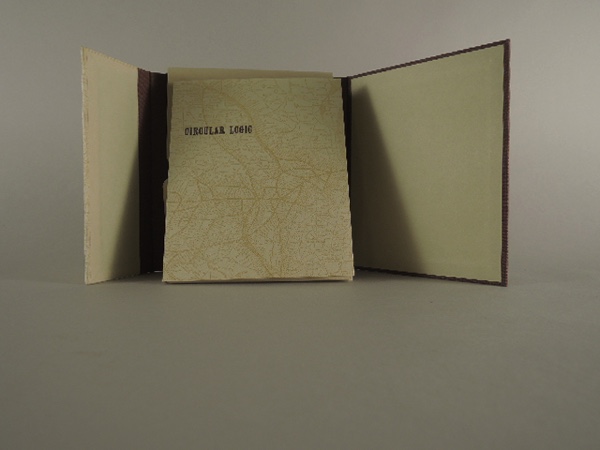 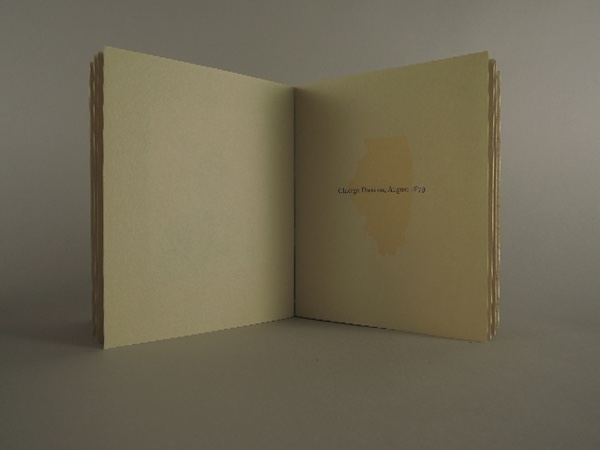 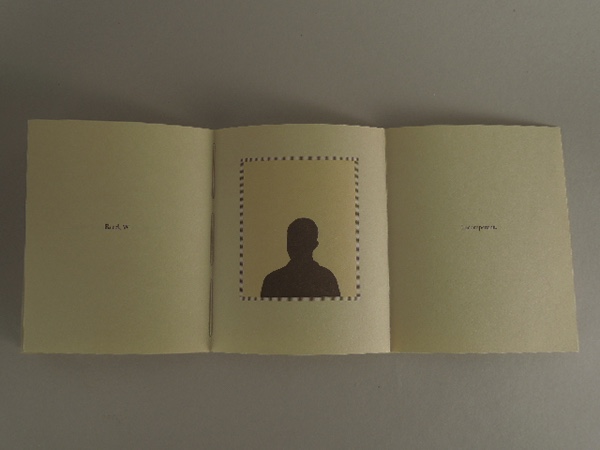 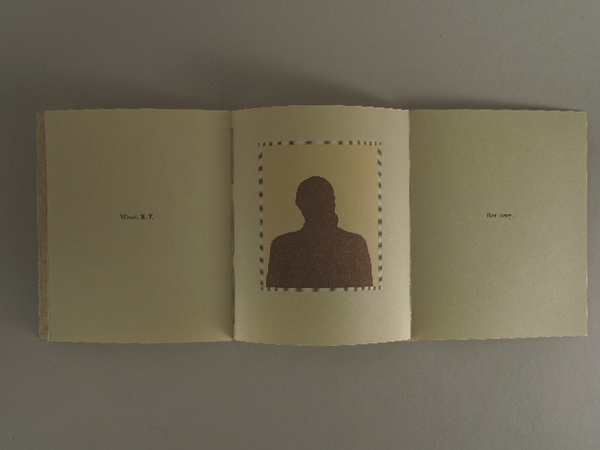 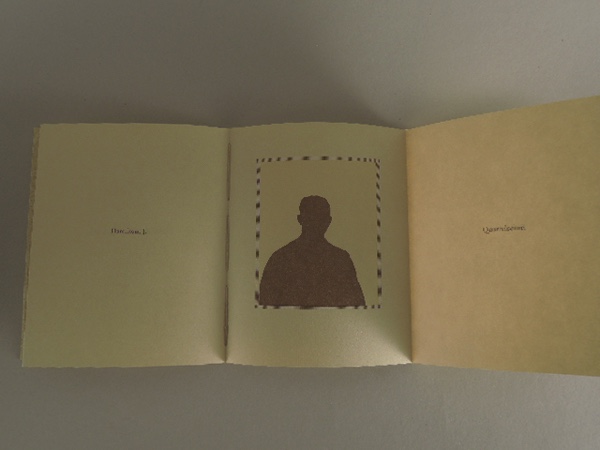 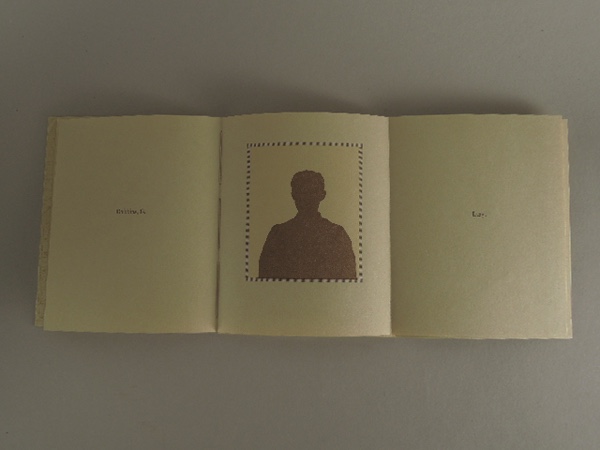 Circular Logic draws from company circulars from the Chicago, Burlington and Quincy Railroad (CB&Q) archive at the Newberry Library in Chicago. Specifically, the book presents an account of terminated employees and the reasons they were fired. Olson makes a number of choices that reinforce the book’s relationship with the archive that inspired it, which ultimately positions the book as commentary on the concept of the archive as well as the particular content. Even the book’s housing in a trifold portfolio straddles the vocabulary of books arts and conversation. The paper has the look and feel of aged newsprint, and the typography and imagery have their roots in the 19th century. Additionally, a number of indexical elements point to the railroad, including a rail map that also serves to unify the book and its cloth covered portfolio enclosure.

Circular Logic is a pocket sized codex. The cover is letterpress printed with a CB&Q Railroad map on heavy cover stock and the text block is attached only to the back cover. This allows the viewer to open the book completely flat and also to appreciate that the link stitch sewing was done across tapes printed with the same map as the cover. The next surprise is that each recto folds out to create a three page spread. The initial spread shows an employee’s name on the verso and their job title on the recto. The second action, unfolding the right hand page, reveals a portrait of the employee in what is now the center of a three page spread with the reason they were fired on the far right.

Through this structure, the reader is anachronistically implicated in the employee’s termination. Hidden behind the folded page, the employee is in limbo like Schrodinger’s cat, both alive and dead, simultaneously employed and terminated. Only when the reader turns the page to view the portrait is the employee fired. The temporal confusion recalls Barthe’s observation that in film (but also artists’ books which are sequential), images operate in the future perfect tense; they simultaneously have-been and are-yet-to-be. However, unlike in film, the reader of Circular Logic determines when the yet-to-be is enacted. Perhaps knowing that the subject is already deceased lessens the burden of firing them. The result is a sort of game theory, driven by the reader’s curiosity and a sense of schadenfreude, which is strengthened by the comically quaint rationale for many of the terminations.

The book’s three-page spreads, each with a portrait in the center, resemble an altar or the kind of hinged triptych photo frames reserved for the nicest family photos. Either reference lends the book a quality of intimacy and remembrance. Formally, the three page spread also creates enough white space to balance the weight of the subject’s silhouette. The left and right pages have no more than a couple words, printed in small type, against stark expanses of white space. What these spreads lack in narrative, they make up for in spacial composition.

The minimal text, quoted directly from the company circulars, thus seems all the more matter of fact and impersonal. The type is set in Bulmer, which makes sense historically; perhaps it is the exact face used in the original circulars. The typography, in terms of size and typeface, certainly adds to the bureaucratic sensibility. As a narrative text, Circular Logic is unusual, introducing each character at the same plot point: their immanent termination. The characters exist parallel to one another, tragic figures connected only through their misfortune, destined not to interact. Even their names have been altered, which heightens the bureaucratic aesthetic. The reader is challenged to sympathize with subjects whose identities are obfuscated at every turn.

The flat silhouettes divulge mostly hair style and head shape and do little to lessen this challenge. The portraits are printed from photopolymer plates exposed using hand cut rubylith stencils. The images are derived from anonymous photographs from the same era, and the image making process also seems to recall the paper silhouette portraits that proliferated around the turn of the nineteenth century. Combined with the altered names, the anonymity of the silhouettes reinforces the idea that the subjects’ identities are being withheld to protect them, whether out of compassion or bureaucratic best practices. Behind either rationale is a tinge of comic absurdity given the book’s obscure subjects, small edition size, and artistic intent.

Given the historically appropriate typography and imagery, it is from the design decisions and details surrounding the imagery that the book’s artistic license emerges. The silhouettes are printed in brown, matching the title and inside text as well as the cloth cover on the book’s enclosure. Each silhouette is situated in a rectangular frame, the same on each spread, which is printed in the same golden yellow as the route map on the cover and spine. The yellow frames are surrounded by a brown ornamental border; a simple pattern of hatch marks. This pattern is a ubiquitous letterpress border, but in this context it reads perfectly as a railroad track. The presentation of each portrait unifies each spread with one another and with the book as a whole.

This unifying function is one way Circular Logic interrogates the concept of the archive as well as the specific content of the CQ&B Railroad. The reader receives an orderly presentation of certain data, which looks and feels like an archive but may have little in common with its actual source. As Olson explained at a recent panel discussion in Chicago, Circular Logic grew out of her own time working with the CQ&B archive at the Newberry Library. The book is not a simple representation of the original archive, but is the product of reading, editing, and reproduction, which are all creative acts. Decisions like withholding the subject’s real names and obscuring their identities, the book both uphold certain scholarly conventions (even to an absurd degree), and simultaneously question the archive as a source of truth and objectivity. Olson activates the archive and then invites her readers to do the same. 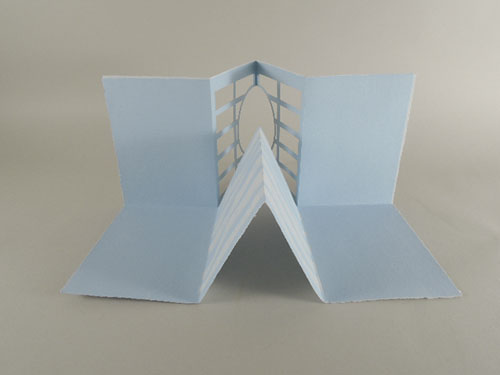