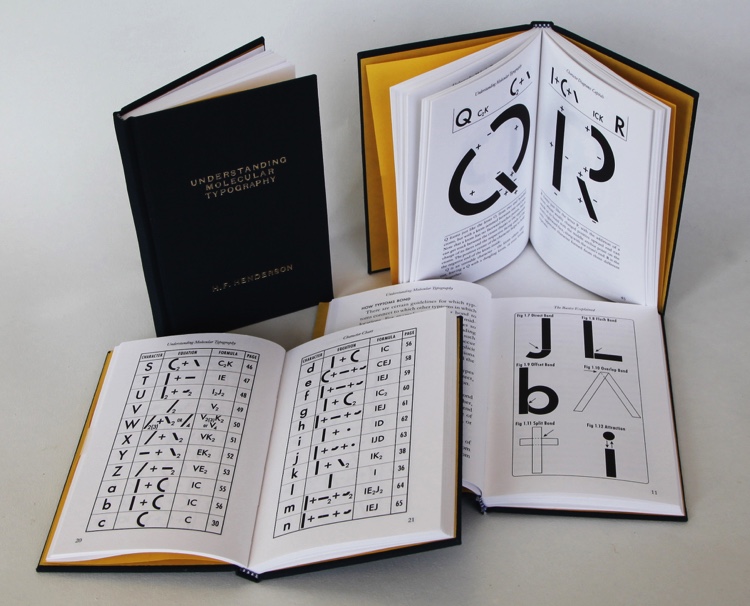 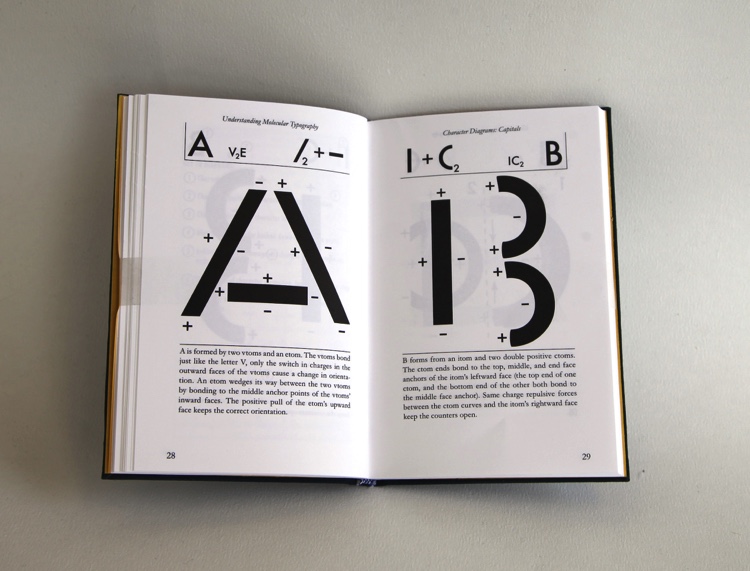 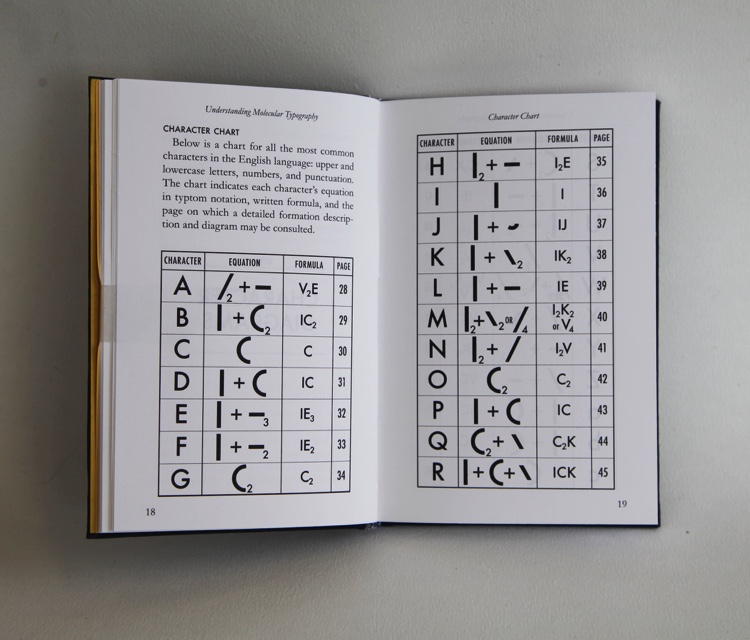 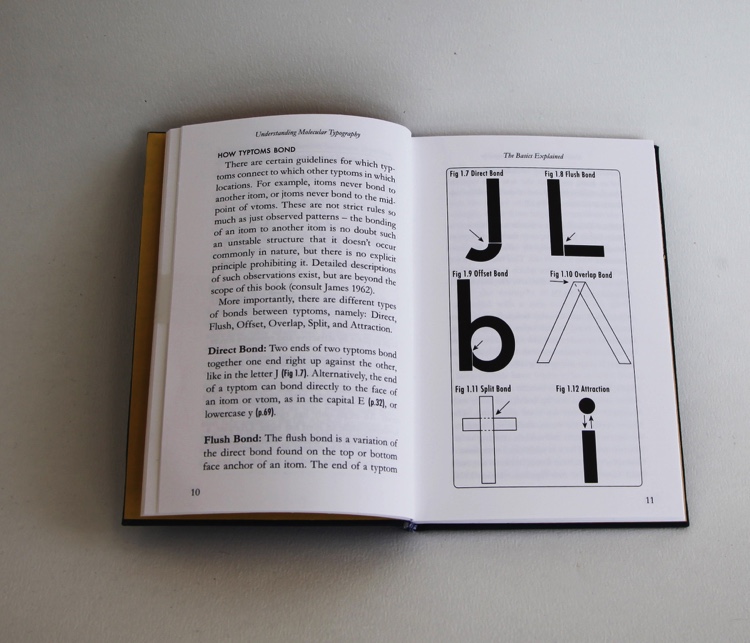 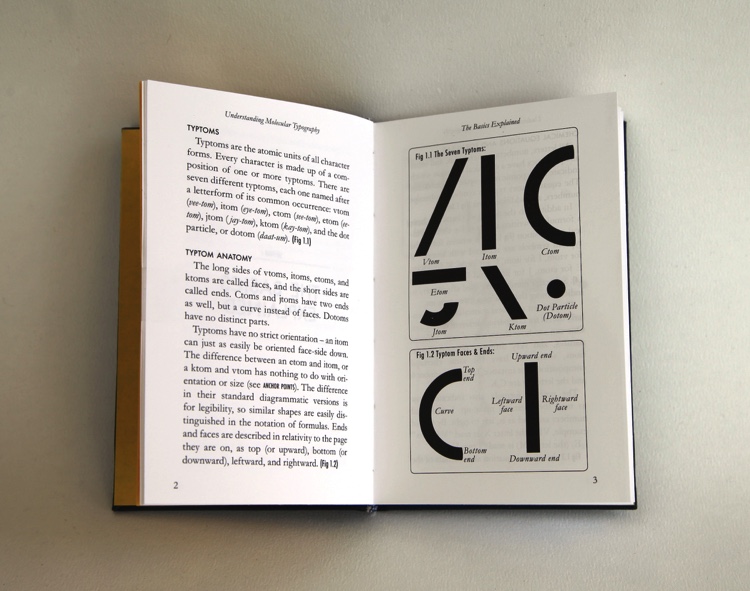 Understanding Molecular Typography appears to be a textbook, authored by H.F. Henderson and published in 1992. In fact, Understanding Molecular Typography is an elaborate work of non-­narrative fiction created by Woody Leslie. The line between fiction and reality is blurry from the start. The book opens with a fictional title page that is also a true colophon. The book’s publisher is listed as Leslie’s own imprint, One Page Productions, and the title page accurately states that the book was printed at the Center for Book and Paper & Print Arts. However, the ISBN number and information regarding bulk purchases are fiction (sort of, the phone number listed is Leslie’s cell). Blurry, indeed.

The book’s appearance helps sell the deception. Offset printed, case­bound and covered in a standard dark blue book cloth with gold foil text, it appears to be a specialized text for a limited audience. Even its smallest details like the blue and white headbands and goldenrod endsheets help the book look more like an academic or trade publication than an artists’ book. At a comfortable 4 x 6 inches, it is presented as a primer for the lay reader rather than an exhaustive academic textbook ­ a premise which allows Leslie to cover a lot of content and to do so in a humorous way.

Before digging into the book as an artists’ book, it is helpful to summarize the content of the ostensible textbook. Understanding Molecular Typography is an introduction to the chemical structures of type, which determine the formation of letters and words. The book focuses on scholarship from the 1950s­1990s and attempts to synthesize more academic writings for the average reader. It explains how positive and negative charges bind basic units into letterforms, and anomalies like serifs and variance from typeface to typeface are discussed. What follows is an extensive set of illustrations paired with written explanations of each letter’s chemical structure, using a notation system outlined earlier in the book. Henderson’s conclusion situates the field within a broader context, discussing the ecological, economic and many other implications of Molecular Typography.

Just as the book’s structure is a conventional codex, the structure of the text itself is that of a standard non­fiction book. There are a table of contents, preface, and introductory remarks followed by various charts and diagrams, a conclusion, glossary, and bibliography for further reading. In form and content, Understanding Molecular Typography subverts the authority of scientistic writing through absurdity and humor, which are related and reinforce one another, but operate differently throughout the book. Absurdity abounds in both content and presentation, from the taxonomy of letter anatomy (‘typtoms’ like ‘itoms’ and ‘vtoms’) to the profusion of cross referenced figures and phonetic pronunciation guides. The specialized jargon and seriousness of presentation will be comically familiar to readers from their own studies in typography, chemistry, or some other discipline.

In other places, a more direct humor erodes the book’s scientistic pretensions. In his author bio, H.F. Henderson is credited for his book, English is Easy, and So’s Your Mom. Rather than a dead give away though, this title also references the silly, often pun­-based names academics rely on to get their writing published. The bibliography also sports titles like “Stay Positive: The Ramifications of Charged Language.” Another source of humor are the intellectual acrobatics used to explain certain characteristics of type. The scientistic authoritativeness of Henderson’s explanations in combination with their utter incompatibility with the reality of type design is especially entertaining to the reader who is versed in the history of type or writing systems. Like a creation myth, these explanations have a naive charm and an admirable internal logic in and of themselves, but are made more enjoyable by their relation to type design, linguistics, chemistry, and other actual disciplines. The following passage epitomizes this humor and bridges the gap to a discussion of the philosophical inquiries behind the book.

“Also note that the segregation of ‘serif’ and ‘sans serif’ isotopes is a human intervention, essentially a curation of selected bonding types, albeit unconsciously on a chemical level, based on aesthetic choices. Uncurated by the design conscious minds of humans, typtoms would likely bind [willy­nilly]. The effect of human language on typtoms is a long, complicated history, one we were largely ignorant of until the 1960s (consult Anderson, 1988 and Norbert 1974).”

It would be enough if Understanding Molecular Typography simply co­opted scientific publishing and warned us not to uncritically accept authority, but by focusing on typography, the book also engages some of the most interesting problems of language. Like many artists’ books, the problems posed might be familiar to readers of Wittgenstein, Chomsky or Derrida. It should be clear from the descriptions above that the book is nevertheless not only accessible, but enjoyable. These implications are never didactic. Even when the fictional Henderson raises such quandaries directly, they are always one step removed from the real questions that Leslie poses for the reader.

If a word’s meaning changes depending on the word that follows, does a word mean anything on its own? Are there ideas that cannot be expressed through words? If we understand the world only through language, are there limits to our understanding? Can we ever know precisely what someone means when they speak or write? Understanding Molecular Typography is not just for book artists, letterpress printers or designers, though those of us who are will no doubt find it especially enjoyable. It is humorous and thought­provoking on many levels, and takes itself only as seriously as it needs to. One can only hope Leslie eventually produces the many books and articles listed in the bibliography. 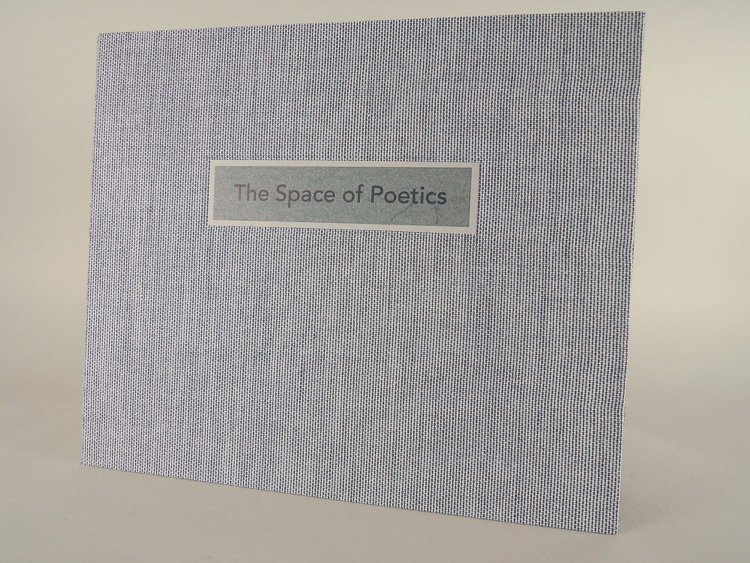